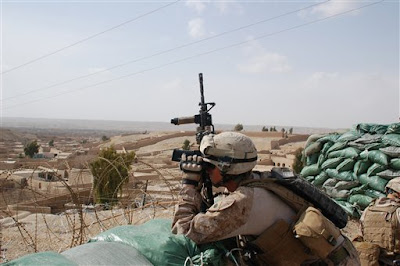 A piece in the Spectator this this week offers a perspective on Afghanistan should be read by everyone who wishes to claim that they are in the least bit well-informed – not least by the editors and journalists of the Spectator.

Written by Dr Matt Cavanagh, a former Cambridge don, he was during the crucial period of the current military campaign a special advisor to Des Browne and then Gordon Brown. A man from the "outside", with an academic rather than military background, thus got a unique perspective, part of which he now reveals.

Headed "Operation Amnesia", Cavanagh argues that Britain's failings in Afghanistan have as much to do with short memories as shortages of troops, noting that the transition process, from insurgency to pacification is "as much about symbolism as substance". It is designed to satisfy the desperate search for a credible "metric of progress" even as violence remains stubbornly high. Measures of territory occupied and enemy "body count" are rightly rejected as counterproductive, and more detailed assessments of the Afghan state, of its army, police, or local governors, are far from reassuring.

With delicious irony, he seizes on an example of "progress" in Lashkar Gar – an open-air concert, attended by thousands of Afghans. Such an event would have been "unthinkable" in previous years, according to the BBC. In fact, a similar event took place in May 2008. Then, it too had been seized on as evidence of progress.

Remarks Cavanagh, this really symbolises is how short western memories are. Few bother to read up on the past, and most are focused simply on the short period for which they are seconded to the job. Short-termism has cursed every aspect of the campaign. Journalists produce reports devoid of historical context, and are too eager to believe their briefings. Ministers, advisers and civil servants doubt that they will be around long enough to see any success, but fear that they may preside over disaster, and so adopt a risk-averse approach until they can pass the whole mess to their successors.

The military react in the opposite way, determined to make an impact in the short time they are there. This may seem more admirable, but its effects are equally perverse - especially when combined with a narrow way of thinking about how to make an impact. Large-scale, conventional military engagements predictably recur in the second half of each brigade’s six-month tour. Afghans watch the British clear and re-clear territory, but to each new batch of soldiers, it looks and feels like success.

During the Vietnam war, Col John Paul Vann put it brilliantly. "We don't have 12 years' experience in Vietnam", he said. "We have one year's experience, repeated twelve times". This could be adapted for the British military today. We don't have five years' experience in Helmand, we have six months'’ experience ten times. Successive brigades have relearned the painful lessons of their predecessors, or overcompensated for their perceived failings. Debriefings of battalion and company commanders, and attempts to harness their valuable experience, have been perfunctory.

Four years ago, when Cavanagh was working for the then defence secretary, Des Browne, he and the Secretary of State pressed senior military officers to look for ways of mitigating this short-termism: longer tours, or a staggered rotation of units, or greater continuity in the command structure. The army, then led by General Dannatt, flatly rejected the first two options. They dismissed longer tours on the basis of the strain on soldiers and their families, and rejected staggered rotation due to the importance of "a brigade training and deploying as a brigade".

The argument for "training and deploying as a brigade" appeared rather dogmatic, encouraging precisely the kind of large-scale set-piece engagements of concern. It also put the creaking helicopter and transport fleet through the added strain of mass troop rotations, and required us to keep scarce equipment in Britain so an entire brigade could train with it.

And here comes the rub. Such is the modern dogmatism and the undue prestige afforded to men in uniforms, with their merit badges, sashes and braid, all with their pretty medal-ribbons on their chests, that civilian advisers and strategists shied away from overruling the military. We, says Cavanagh, worked with the less dogmatic generals to identify a small number of senior posts (and junior posts in specific areas like intelligence) where tours of duty could be lengthened.

We were assured that other initiatives would improve continuity, but these too were relatively minor and seemingly given a low priority. The issue of command structure got lost in wider debates about troop numbers and the looming arrival of American forces in Helmand.

Cavanagh was "more optimistic" about the Americans’ ability to learn and adapt, although this optimism did not survive the continuing mess in Sangin, where the "transformation" of the campaign now looks like a one-off "reset" of the counter-insurgency approach rather than the start of a process of continuous learning.

That brings to a head the issue of troop numbers, the subject of such heated debate during 2009, and one most heavily miss-cast by the media, with mischievous and ignorant politicking of the Conservatives, with far too many people who should have known better standing on the sideline, cheering.

The issue, of course, is one of infinite subtlety and complexity, which explains why neither the media, opposition politicians nor the military could get it right. As someone who had a share in responsibility for those limits, however, Cavanagh explains how that the potential for troop increases exacerbated the military's dominance of what was meant to be a joint civilian-military campaign, and fed the tendency of new commanders to try to do too much.

For three years the top brass had argued that additional troops would enable us to "thicken" our forces, increasing their effectiveness, reducing casualties, and enabling proper stabilisation work to begin. But when we sent reinforcements, it had the opposite result: an expanded footprint, increased activity, and increased casualties, to no obvious strategic effect. This may well be precisely what is happening in Sangin now.

The tragedy is that the military's obsession with troop numbers and the media's failure to challenge it (to say nothing of the party politicking by the Conservatives) have obscured the wider lessons of the Afghan campaign.

Before the American surge, lack of troops was blamed for everything. Since the surge, the new response to any setback or criticism is that "the right resources have only just been put in place". But like it or not, the campaign is already measured in years in the minds of those who matter: the Afghan people and the public back home.

The more fundamental point is that more troops would not have ensured British success in Helmand. Where experts estimate that you would need half a million troops just to cover the ground, not even the American surge — more than ten times what we could have mustered — can ensure success by itself.

More troops, writes Cavanagh, "will not help our militaries master the complex tribal dynamics, nor judge whether they are making friends faster than they are alienating people. More troops will not change the attitude of the Afghan and Pakistani authorities, nor create a political process that addresses Afghan grievances".

Because of these wider political problems, Britain's lack of success in Afghanistan in strategic terms cannot be blamed on the military. But at the operational level, most of the responsibility is theirs. They took the tactical decisions in summer 2006 — admittedly under great pressure — to disperse our forces across the "platoon houses" in northern Helmand.

They chose, in the years that followed, to continue to prosecute the campaign in an expansive and aggressive manner, despite the constraints on resources and the lack of evidence that this approach had a lasting positive effect. And while they lost no opportunity to plan and lobby for more troops, they were slow to fill the gaps in our intelligence, or to respond to the Taleban's shift in tactics towards improvised explosive devices.

Thus, says Cavanagh, even if a window of opportunity arises at the strategic level, as it did in Iraq, the military will need to learn and adapt far faster if they are to prevail against an enemy which is adaptable, nimble and utterly unscrupulous, in an environment which is linguistically, socially and culturally alien. This, he says – with a degree of understatement that is belied by the word - "will be difficult". "Impossible" might be a better choice.

In admiring the courage and character of our armed forces, Cavanagh concludes, it is easy to forget that the military is also a large bureaucracy. Unique in many ways, not least in putting their lives on the line, but a bureaucracy nonetheless. By their nature, bureaucracies are blind to their failings and slow to rectify them — even when staring at the possibility of defeat.

When failure becomes not just a possibility but a reality, it ought to provide the impetus for change. In war it is vital to learn from mistakes. The American military did this ruthlessly after the Kasserine Pass in the Second World War, and they did it again under Petraeus in Iraq. But it won't happen if politicians are blamed instead, as in America over Korea and in Britain over Iraq.

The media, the Conservatives and the military have already prepared the way for a similar narrative on Afghanistan: blaming the previous government, mainly for not providing enough resources. If only we'd had more troops and better equipment, the argument will run, we would have defeated the Taleban, and got out on our own terms. It suits a great many people to go along with this, but in the long run it will only prevent us from learning the real lessons of the past five years.

And in those last two paragraphs, we see the future. All three sets of "players" are locked into the mantra, (Labour) politicians bad, military good, neglecting the simple but hugely important issue in fighting insurgencies, that the politics both on the ground and back home are dominant. The military cannot win insurgencies – they can only but time for a political settlement. But when they forget this – and the politicians hide behind their own inadequacies – we have a recipe for disaster.

What Cavanagh does not say, though, is that in this campaign, Britain – unlike in 1940 – is indeed the junior partner. Resolving this problem is above the pay grade of our own politicians, as we are required to take the lead from the United States – a nation which has no understanding of, nor any feel for, the region.

On this basis, our politicians, no more than our military, can prevail. The best we can hope for is to muddle though, with as few casualties as possible, until we look to have a credible opportunity to escape, with our reputation not too badly tarnished. In the interim, the military is doing what it does best, covering up its own inadequacies. That is something in which – like any good bureaucracy – it is highly skilled.