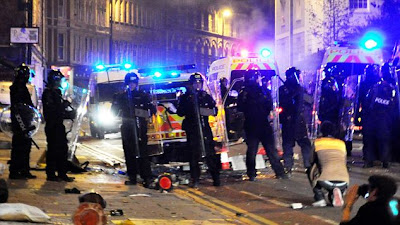 The Sunday Times, cowering behind its paywall, does us all a favour by limiting the reach of its distortions. And that is being kind. In its coverage (print edition) of the Bristol riot on Thursday night, it tells us:


A protest against a new Tesco Express outlet in the Stokes Croft area of Bristol erupted into a seven-hour riot as police clashed with 300 demonstrators. Eight officers were injured and tens of thousands of pounds worth of damage was done to the store.

Readers will find that the copy has been produced by Dipesh Gadher, with additional reporting by Claire Hayhurst and Gemma Meredith. So an ethnic and two girlies combine to write something which is completely untrue. This is way beyond distortion, or getting it wrong. The first, all-important sentence is simply not true. It is a lie.

Then we have the clever-dick comment from Rod Liddle, who piggy-backs on the false story and delivers his own dollop under the heading, "Trust me, you idiots, every little Tesco riot doesn't help". Well, we don't trust you ... because your piece is crass. You haven't done your homework and you are talking out of your backside.

The worst of this though, is that the real story is not being told. In as neutral a way as possible, it can be asserted that the police, on the basis of flawed intelligence, grossly over-reacted to a perceived threat, mounting an ill-considered and provocative action which sparked a completely avoidable riot in which a number of people were hurt and much damage was done.

In the way of things, the police are now covering up their own incompetence, and trying to evade the responsibility for their actions, blaming everybody else except themselves. And, instead of reporting this, the great Sunday Times writes a fictional account, missing the point completely.

Mind you, The Daily Mail headline and the opening to its story is just as crass, although it does give you enough detail for you to be able to read between the lines. But that is the MSM for you – when it comes to serious issues, it is completely unreliable. They are taking money under false pretences.