I think we already knew this 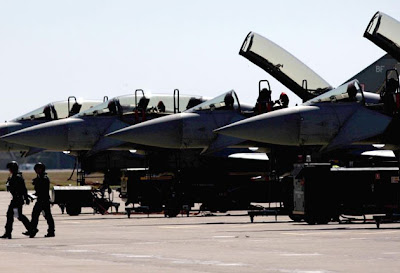 Pilots of the RAF's Euroshiters are being grounded because shortages of aircraft spares mean they cannot put in enough flying hours to keep their skills up to date. This is according to The Independent, on the back of the Public Accounts Committee.

But this is not new. It actually goes back to last year when someone gave 13th Century Fox a question to ask and he managed to get the words out in the right order. Even then, they were cannibalising airframes, so it was obvious they were in trouble.

Spares were always going to be a problem for this benighted machine, more so if we insist on using the things for anything more than the occasional airshow. Somehow, I suspect that if we'd bought F-16s (like the Dutch and Belgians), we'd we still using them, we'd have a lot more of them, and they would have cost us a lot less money. But no, we had to go for Heseltine's folly.

Ah, but the Euroshiter is so much better, I hear you all say. Well, chuck ... not if it is grounded through lack of spares it ain't.

In reality, though, this is yet another MoD cock-up. From Aviation Week on 4 September 2009, we learn that RAF utilisation of its Euroshiters was more than double that of the other "partner" nations. Yet, despite their higher utilization, the RAF had ordered fewer spares packages than partner nation forces. Up to February 2009, MoD figures showed that the UK had ordered less than 35,000 lines of spares compared with 37,000 for Spain, nearly 45,000 for Italy and more than 50,000 for Germany.

And surprisingly enough, now that The Boy wants to play in Libya, he's creating even more stresses on an already creaking system. One of these days, the politicians might just learn that the real enemy of Britain is the MoD. The best thing they could do is launch an invasion of the Whitehall headquarters to restore British sovereignty there.

Even now, the cynicism and duplicity of the RAF bomber barons and their mates in the MoD are almost beyond belief, as Lewis Page in The Register writes. Perhaps people will believe me now when I tell them in my book that the MoD is an organisation that would sooner let soldiers die than have their over-priced toys junked.

But do not forget, it was a Tory decision to buy the Euroshiter ... Heseltine's bid to increase European integration. Well, he got what he wanted. We end up with a useless, over-priced pile of shit. That, it seems, is the way of things. The taxpayer has been screwed, screwed, and screwed again - and they want to come back for yet more.