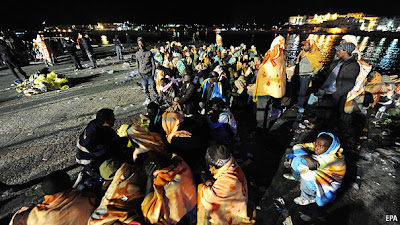 If you had been foolish enough to watch on TV yesterday the programme which the BBC passes off as news, you would have come away with the impression that the most important thing in the universe was the coming referendum on AV.

The cry is taken up by the MSM, with the likes of the Daily Mail offering us its leader headed: "How apathy over AV vote threatens Britain's democracy". The sentiment is, of course, fatuous, indicative of the shallow, one-dimensional thinking that afflicts British politics and the media.

There is no apathy, only indifference – which is a completely different thing, even though the Mail leader-writer manages to confuse the two. Indifference is a rejection of the agenda set by the political classes – a simple statement that their values and priorities are not ours.

The real threat to democracy, of course, comes with the steady encroachment of the European Union, the refusal of the media to recognise and acknowledge it, and the ignorance and gullibility of the general public. That very much makes the media part of the problem, about which the likes of the Mail are doing absolutely nothing.

As for the AV referendum – it is an insult. We wanted a referendum on the EU treaty, and they gave us this instead. The referendum itself, and the result, is a complete irrelevance. It matters not HOW we vote, when we are ruled by an unelected supreme government in Brussels.

However, the other aspect of this attempt to set the agenda is to create a distraction, keeping attention away from the more important and pressing issues of the day. Far more important, for instance, is the growing crisis over Tunisian immigrants. Even The Economist is flagging this up as presenting "the greatest danger to European unity", over and above the economic crisis and the bailouts.

This issue is all over the international press and the agencies, but you will struggle to find any serious coverage in the British MSM. And we are long past the days where there can be any suggestion that this is accidental. The dumbing down is combined with a quite deliberate attempt to keep the population focused on trivialities, "bread and circuses" and issues which interest the political classes – hence the AV referendum.

Too often, one fears, our politically naïve, gullible and increasingly poorly educated populus falls for it, but there are occasional signs about which one can be optimistic. A Bristol firm has just announced that it is cancelling two coaches for the royal wedding, through lack of interest. That is one of those "bread and circuses" issues that the media is desperately talking up, but it is now so over-hyped that people are turning off in their hundreds of thousands.

What we must learn from this, and what they must be told, is that their agenda is not our agenda – we have to learn to reject theirs. When the media or the political classes tell us to look in one direction, then is the time to look the other way, to see what is really coming. And as for their AV referendum, they can stick that where the sun does not shine. It is theirs, not ours and we want nothing to do with it.