Criticising Peter Oborne these days is rather like pulling wings off flies – after you have given them a dose of fly-spray and waited until they have quietened down. It is so easy that there is no sport in it. But when the man calls himself a "chief political commentator" and writes such unutterable tosh that it makes your eyes water, he only has himself to blame.

This man is now suggesting that the Labour hierarchy have suddenly developed a dose of euroscepticism, but the man isn't even professional enough to call a spade a digging implement. You can neither trust nor respect anyone who awards himself the title of "political commentator" who then starts referring to a politician as "anti-European". It is so amateur as to defy description.

The piece as a whole, though, reveals an incoherence which is quite staggering in its breadth. It posits that, for the last twenty years, there has been a split in British politics over "Europe", with the Conservatives characterised as a "eurosceptic" party. But, with Labour veering towards an "anti-European" position, the "consequences for British politics are profound".

For the past 20 years, Oborne asserts, "the Conservatives have been the only major Eurosceptic party in Britain". This, he says, "meant they felt so isolated that they were afraid to speak out – the main reason why David Cameron has gone out of his way to close down Europe as a subject of debate".

Yet, as we remarked in an earlier piece, when it comes to promoting the march of European political integration, the Conservatives are in the premier league. It was Ted Heath, a Tory (theoretically), who took us in (after the ground-breaking by Macmillan), it was the darling Thatcher who led the "yes" campaign for the Tories in the 1975 referendum, and it was she that agreed the Single European Act. 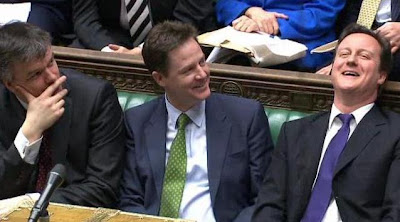 Then, of course, it was little Johnny Major, Thatcher's protégé, who negotiated the Maastricht Treaty (aka Treaty of the European Union) – and wrecked the Conservative Party getting it through the Commons. Now the heir to Heath, the fabulous Mr Cameron, refuses us a referendum on the Lisbon treaty and gives us AV instead. This is the man who, on 9 March in the House of Commons, told Peter Bone, "I think that we are better off inside the EU but making changes to it, in the way that we are setting out" (pictured).

Not in a million years, not in any way, degree or fashion, could the Conservative Party in general or Mr Cameron in particular, be considered eurosceptic. Yet, in defiance of reality, ignoring evidence and experience, Mr Oborne insists to the contrary. His paradigm must prevail because that is what he wants it to be. That is the narrative with which he is familiar and with which he is comfortable.

But that is also the measure of the Daily Telegraph these days ... facile, amateur and ill-informed. More alarmingly, it is locked in a bubble of unreality which has completely departed from the truth. And I've heard tell that there are some people in very interesting positions who you would least expect to support such a line, but who would agree completely.

When the history of this period comes to be written – if there is an honest scribe to do it – one of the features will almost certainly be the collapse of the media as an intelligent or even influential political force. And Peter Oborne – another writer speaking to the bubble, lost in his own private fantasy – will be cited as a prime example.