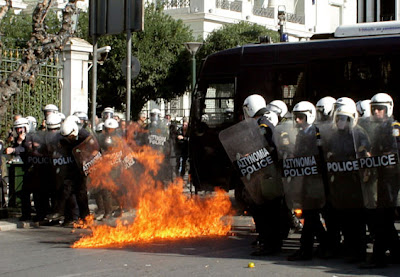 If I could work out what the geeks were actually saying, I'd probably be heading for the hills. However, the headline seems clear enough: "Greece Is Now Doomed" – or is it domed? Even Reuters sounds a bit worried. But what does "restructuring" really mean, daddy? Trust Ambrose to bugger off when you really need him.

Anyhow, I guess the Greeks'll not be bearing gifts – although they may now be donating large numbers of petrol bombs to the local constabulary (picture above of one I made earlier). The likelihood of that seems high, as the knobs are promising "more austerity" - not for themselves, of course, but for everybody else.

The puzzling thing is that they're saying the dominoes are "isolated". Is this from the same lot who saw the bankers' crisis coming (not)?