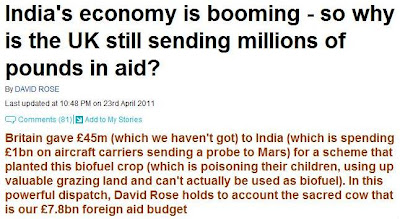 David Rose, in what is described as a "powerful piece" in the Mail online, lambasts DFID for supporting the growing of jatropha in Indian Madhya Pradesh, with British aid amounting to £45 million. The plant, "a strange, pale-stemmed plant with livid green-and-yellow leaves, native to Central America", is to be used for the production of biodiesel but, after sketching out how unpopular the scheme is with local Adivasi tribespeople, Rose tells us that "DFID now seems to find its sponsorship of jatropha embarrassing".

He cites Michael Anderson, until last year DFID's India head, who had told a Delhi magazine: "We are definitely not pushing for jatropha", claiming that DFID had never been involved in any scheme to encourage it. A DFID official assured Rose that planting of the toxic shrub has been on a very small scale, and that it has only been used to mark boundaries between fields. 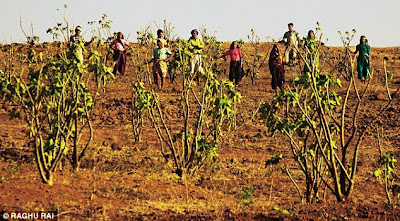 Rose then claims that these assertions are not borne out by the facts. Rather, jatropha cultivation has been heavily pushed by DFID's "Madhya Pradesh Rural Livelihoods Project", which, like almost everything DFID does in India, he says, is managed on the ground by a contracted consultancy firm, Reading-based Coffey International Development. In May 2008, a DFID Vision Document said the project had earmarked 2.5 million acres of land in the tribal areas of Madhya Pradesh for jatropha. Another report in 2009 said 63,000 shrubs were already flourishing.

Backing up his assertions, Rose tells us that DFID's own publications offer few clues. Its website lists each project that Britain funds and the sums allotted, but gives no details, he says. So the only way to find out is to go to India and look, not in DFID's air-conditioned New Delhi headquarters, where all but three of its 103 India staff are based, but in the hinterland of crowded cities and the vast countryside.

Rose, however, may be looking in the wrong place. The "Madhya Pradesh Rural Livelihoods Project" is not DFID, but a state government project, supported by DFID. The difference is more than academic, as the project is entirely managed by the state. The state, rather than DFID, provides the details.

Those details are, in fact, quite comprehensive, and although the latest report does refer to jatropha plantings, with just under 63,000 plants financed, this represents a tiny fraction of total agricultural support. Overall, millions of plants have been financed (on a co-funded basis), including 2.3 million bamboo plants and rhizomes, and 1.1 million mulberry bushes.

Thus, the big culprit behind the jatropha hype in India, it would seem, is not DFID, or even the Madhya Pradesh government. More likely, it is our old friend TERI-India, prop. Rajendra Pachauri. In 2006, his Institute signed up with BP for a $9.4 million project , aiming to plant 8,000 hectares in three districts of Andhra Pradesh.

Subsequent to that, however, we learn that TERI is working with the Indian government on a detailed project report for the National Mission on Biodiesel, and claims to have established plantations in Madhya Pradesh, bringing the total jatropha plantations under its management to 0.6 million, possibly with national funding.

This was despite early indications that suggested the crop was being over-hyped. There has since been a progressive realisation that widespread jatropha cultivation is not really feasible. The production model so far proposed is now recognised as not viable.

While many sins can be laid at the door of DFID, therefore, it seems that the problem of jatropha plantations in Madhya Pradesh is not one of them. That seems to be a home-grown disaster, aided and abetted by that man of such very great judgement, Nobel prize winner Rajendra Pachauri. And one should always give the Devil his due.