That's what the Press Association says. I guess Gaddafi must be short of nicotine patches ... although it has to get permission from the UN first. But never fear ... it has drawn up a "concept of operations".

The EU has established an operations headquarters in Rome under the command of an Italian rear-admiral as part of its plan for a military deployment to Libya. The Ashton thing has written to Ban Ki Moon, the UN secretary-general, offering the military assets, but hey! The overture has been declined. 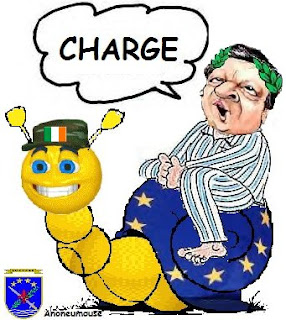 "The operation is agreed. It's ready to go when we get the nod from the UN," said an (unnamed) EU official. And behind the scenes in Brussels ... there is much ambivalence as well as attempts at point-scoring between the bigger member states.

The Libyan government, however, has told the EU where to put its Army firmly rebuffed a proposal from the European Union, saying "it would fight any foreign troops that landed on its soil, even if they were supposedly there to escort humanitarian aid convoys".

Dear God! It's like Ruritania meets Crossroads. You couldn't make this sort of stuff up. Even a comedy scriptwriter couldn't swing it. But never mind ... Pravda is on the case.