MPs should make the law? 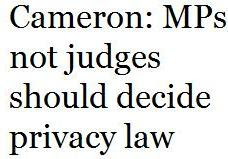 We are so pleased he hear from that nice Mr Scumeron, who has said that he is "concerned" about the spread of super-injunctions which prevent the media from identifying public figures. He says he is "uneasy" that a privacy law is being developed by judges rather than MPs.

Could we also suggest that he extends his concern to the way law is made in Brussels, by the EU, instead of MPs, and by the European Court of Human Rights, and the European Court of Justice. Or is this just a case of leaping on a bandwagon, in the hope that the plebs don't notice the inconsistencies in his position?