The proposition is absurd 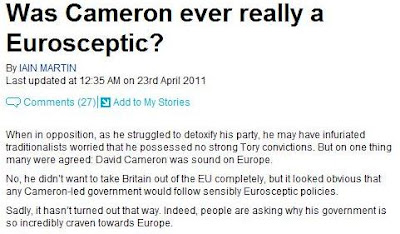 We have long passed the point when political commentators in the MSM are seen to offer any value, but there is no shortage of confirmation in today's abysmal piece by Iain Martin in The Daily Mail. Headed, "Was Cameron ever really a Eurosceptic?" – the response required one word: "no". But illustrating the fantasy world of the Westminster bubble, Martin writes:


When in opposition, as he struggled to detoxify his party, he may have infuriated traditionalists worried that he possessed no strong Tory convictions. But on one thing many were agreed: David Cameron was sound on Europe. No, he didn't want to take Britain out of the EU completely, but it looked obvious that any Cameron-led government would follow sensibly Eurosceptic policies. Sadly, it hasn't turned out that way. Indeed, people are asking why his government is so incredibly craven towards Europe.

It is indeed true that no end of Tory Boys – of all ages and sexes – had convinced themselves that Dave "was sound on Europe", but that was nothing more than a collective delusion. At best, one could simply say that there was no evidence that he was a eurosceptic.

On the other hand, there was plenty of good evidence to say that he wasn't. His treatment of the fishing policy was more than adequate evidence. But people didn't see it because they didn't want to see it. They wanted their leader to be a eurosceptic, and the power of their self-delusion carried them through.

If Martin had any inkling of what was really going on, or any understanding, then his piece could have been quite interesting. But, as always, these political commentators are within the bubble, speaking to the bubble. And pathetically, the man can't even see it. After offering a long list of evidence that shrieks the obvious, that Dave is raving euroslime, Martin identifies a coming flash-point and then observes:


Of course, the Prime Minister could easily head off such a crisis. But it would mean him having to rediscover his Eurosceptic soul and instructing Osborne to find a way of stopping Britain having to contribute to these bail-outs. Cameron's next move should then be to begin work on a proper strategy to reclaim other vital areas of British sovereignty surrendered to Brussels. If he was to do this he might even find he could win an election without the help of his Coalition partners.

The man just can't put two and two together. Cameron does not have a "Eurosceptic soul". He never has had one. There is nothing there to "rediscover". The proposition is absurd, almost as absurd as Peter Oborne and his assertions.