It may be more complicated than it seems 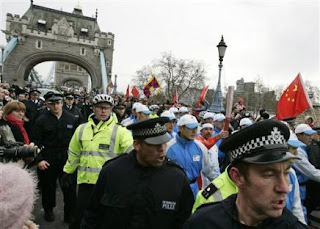 Whatever the broader, human rights issues relating to Tibet – so well articulated by my co-editor - we have always suspected that the proximate cause of the riots in Lhasa might have had as much to do with economic stresses as it did with strictly political issues.

When we first reported on the riots, we noted that one thing that had not been mentioned by the Western media was the massive weather disaster reported in Tibet. We also noted that, with over four million people affected, a not unusual dynamic in such events was for those survivors who can to make their way to the capital for relief and succour, swelling local populations and, sometimes, adding to political friction.

It is of some interest, therefore, to see a piece first published in New America Media and republished in Asian Week by Yoichi Shimatsu, a media studies lecturer at Tsinghua University in Beijing and former editor of the Japan Times Weekly in Tokyo.

His piece, headed, "The Real Reason For The Tibet Protests", notes that, while the Dalai Lama and the Beijing government point fingers of blame for the firestorm sweeping the Tibetan Plateau, neither authority — religious or secular — has much of a clue what is really going on.

Writes Shimatsu, there has been a battle for the grasslands of Tibet which has been smoldering for the past decade over the volatile price of livestock and food-cost inflation, largely due to the skyrocketing market value of meat. What amounts to a tripling of the price of land, due to rising demand in the wealthy cities of the distant Pacific Coast has led to encroachment by one group of herders onto the lands leased by other groups.

Range wars have erupted between odd coalitions of Tibetans, Mongols and Muslims, with Muslim middle-men blamed for the racheting up of prices which has seen a scarcity of meat in local markets and massive inflation.

Thus, in the first day of the Lhasa riots, most of the casualties of arson were Hui Muslim noodle restaurant workers, who migrated to the newly prosperous provincial capital over the past decade — just as Mexican immigrants have gone to major cities to work as dishwashers. Adds Shimatsu:

The frustration and anger of the Tibetan mobs will not immediately result in either independence or genocidal repression — only a heightened state of anxiety and distrust. The rules of Tibetan Buddhism have curbed the native population from common trades practised by citizens of a modern secular nation-state. Instead, a multiethnic caste system is being perpetuated, with the Muslims doing the butchering, running restaurants and driving; the Nepalese crafting the jewellery and brassware; and the Chinese labourers building roads and raising power lines. With rising expectations and ruthless greed, cultural and religious difference is a formula for ethnic vendetta.

That is not to say that the Chinese regime is anything other than repressive, and there can be no doubt that their occupation of Tibet has been and is extremely brutal – with tribesmen still being stripped of their lands and herded into camps. But it would also seem that there are multiple factors at play in the current unrest.

Where this has some significance, beyond the immediate issues that were being rehearsed at the Olympic torch ceremony in London yesterday, is that the economic stresses arising from food shortages and inflation are potentially more far-reaching than the human rights issues which have become the current cause celebre.

And, if that is the case, remedy of the worst human rights abuses are themselves not going to provide any immediate (or any) relief to the peoples of Tibet, or the many other people in neighbouring provinces. The problems in China may be altogether much more complicated and even more intractable than they seem.