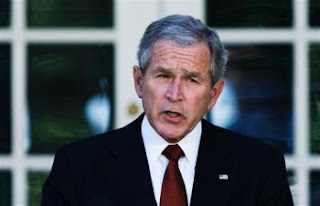 Major news here yesterday was a speech by Bush in the rose garden of the White House on climate change. Having read several extracts of the speech and some reports, I am still not entirely sure of what he had on offer. The speech was detail-lite and more than a little opaque.

The Wall Street Journal has a go at analysing it, noting that critics are claiming a victory of sorts, while at the same time carrying on about half-measures and delay on "the planetary emergency."

Of some little comfort is the paper's observation that Bush has made few departures from current policy. His larger purpose, it says, was to join a debate that so far has been conducted in a reality vacuum, and to force the global warmists to take responsibility for the carbon and greenhouse-gas regulation they say they favour.

The one major policy revelation was Bush's announcement that the US would seek to level off the growth of emissions by 2025, which is sufficiently far in the future to be meaningless politically, and open to substantial variation by the next president, whoever that might be.

Conditions here are not conducive to a detailed study of the full text so I will wait until I get back to England before attempting an analysis, but comments would be welcome. Last full day here – Booker has already left on the morning flight to London and I follow tomorrow – weary but happy.

Our sponsors are already talking of a return trip, as early as a few weeks time. The warmist debate is hotting up, even if global temperatures are not.

UPDATE: Reuters reports that the European Union has called Bush's plan "disappointing". Many delegates at two-day US-led climate talks under way in Paris said faster action was needed to avert the worst effects of global warming.

"The American administration is starting to awake," French climate change ambassador Brice Lalonde said, welcoming the setting of a federal cap for 2025. "It's a bit late".

Looks like Bush is getting something right, if the Euros are hacked off!