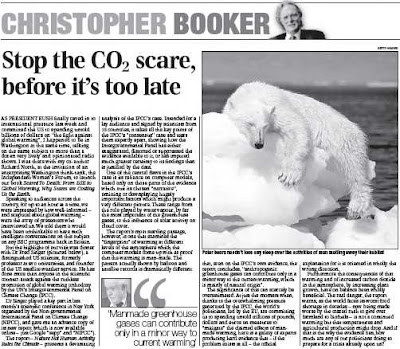 Building on our visit to Washington, Booker launches a broadside against the global warming hype in his column today. 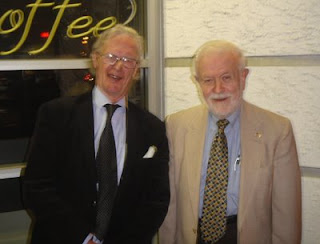 The highlight of our visit (one of them) was dinner with Dr Fred Singer, a distinguished US scientist, formerly professor at two universities, and founder of the US satellite weather service (pictured – Booker and Singer). He, writes Booker, has done more than anyone in the scientific counter-attack against the ruthless promotion of global warming orthodoxy by the UN's Intergovernmental Panel on Climate Change (IPCC).

Dr Singer played a key part in last month's scientific conference in New York organised by the Non-governmental International Panel on Climate Change (NIPCC), and gave me an advance copy of its new report (which is now available online - see here).

The report - Nature Not Human Activity Rules the Climate - presents a devastating analysis of the IPCC's case. Intended for a lay audience and signed by scientists from 15 countries, it takes all the key points of the IPCC's "consensus" case and tears them expertly apart, showing how the Intergovernmental Panel has either exaggerated, distorted or suppressed the evidence available to it, or has imputed much greater certainty to its findings than is justified by the data.

One of the central flaws in the IPCC's case is its reliance on computer models, based only on those parts of the evidence which suit its chosen "narrative", omitting or downplaying hugely important factors which might produce a very different picture. These range from the role played by water vapour, by far the most important of the greenhouse gases, to the influence of solar activity on cloud cover. 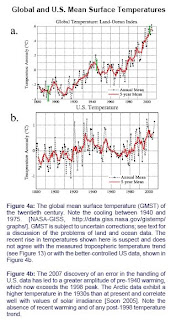 The report's most startling passage, however, is one that examines the "fingerprint" of warming at different levels of the atmosphere which the computer models come up with as proof that the warming is man-made (see graphs, left). The pattern actually shown by balloon and satellite records is so dramatically different that, even on the IPCC's own evidence, the report concludes, "anthropogenic greenhouse gases can contribute only in a minor way to the current warming, which is mainly of natural origin".

The significance of this can scarcely be overestimated. At just the moment when, thanks to the overwhelming pressure generated by the IPCC, the world's politicians, led by the EU, are committing us to spending untold trillions of pounds, dollars and euros on measures to "mitigate" the claimed effects of man-made warming, here is a galaxy of experts producing hard evidence that - if the problem exists at all - the official explanation for it is oriented in wholly the wrong direction.

Furthermore the consequences of that warming and of increased carbon dioxide in the atmosphere have, on balance, been wholly beneficial, by increasing plant growth.

The real danger, the report warns, is not a continued warming but that temperatures and agricultural production might drop as the world faces its worst food shortage in decades (now being made worse by the crazed rush to give over farmland to biofuels). And if that is the way the evidence lies, Booker concludes, how much are any of our politicians doing to prepare for a crisis already upon us?

That, of course, is very much the point. While the politicians are indulging themselves in their global warming fantasies, the best avaiable evidence is that - at the very least - we are entering a period of static if not declining temperatures. Meanwhile, the global economy has become reliant on the "global warming dividend" of increased agricultural productivity. If this now disappears, it will leave real shortages of food and unsustainable price increases, precipitating far more damage and misery than ever the notional effects of global warming could ever do.

But, with the politicians looking in the wrong direction, economic policies are set to make a difficult situation unmanageable, involving massive unnecessary costs and hampering our capability to deal flexibly with the real rather than imagined situation.

Never, it is possible to say, has the global political community got it so wrong, with such a potentially devastating effect. And, as is always the case, while the politicians play, we pay.