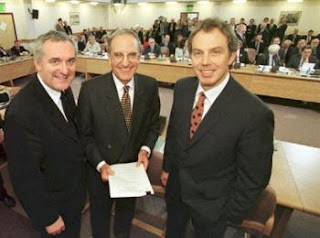 With our far-flung horizons, it is sometimes easy to miss what is happening on our own doorstep.

Yesterday – not that you would know it from the coverage in the MSM - was the tenth anniversary of the Good Friday Agreement, the highly controversial deal that brought a semblance of peace to Northern Ireland, and paved the way for the withdrawal of our troops.

The event is commemorated on Conservative Home with a reflective piece by shadow Northern Ireland secretary Owen Paterson – now with a number of comments that indicate that the old divides are still there, not even under the surface.

In its own way, Northern Ireland is a mirror for many of the political hotspots throughout the world, where politics are decided on ethnic and sectarian rather than on ideological grounds. Whether it be far-flung Iraq, Nigera, Kenya or - even closer to home – Belgium, when communities decide on such grounds, rather than on the merits of the issues, governance will always lack the maturity and stability which will enable real progress to be made.

It is easy, however, to suggest that old enmities, the memories of hurts and historical injustices should be forgotten, all in the interests of forging on to the sunlit uplands, where everyone lives in peace, harmony and justice, ruled by a band of Platonic guardians, whose only motivation is the welfare and the wellbeing of their peoples. But life isn't like that.

Real life is about resentments, old rivalries, manoeuvring and positioning for advantage, and the venality of humans who themselves vary in competence, capabilities and in their depth of understanding.

Thus, like the rest of the world, Northern Ireland is messy, and will remain so. But, as long as people are not actually killing each other, and as long as life can be conducted without the fear of being ripped apart by a random bomb, then that is progress of a sort. Whatever its manifest imperfections, the Good Friday Agreement, and that which went before, achieved that much. It is a start.