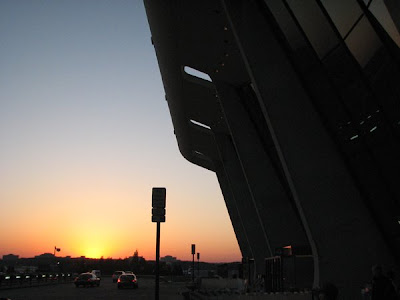 On the constant adrenaline rush of an overseas visit, with the added complication of the (self-imposed) discipline of keeping up the blog, the torrent of information and events seemed at times almost overwhelming.

This was no more so than yesterday, arriving at dawn at Dulles International Airport (pictured above), where even the departure lounge has wall-to-wall TV screens, churning out non-stop news bulletins, where every corner (it seems) is occupied by some intense person tapping away at a wireless enabled laptop, and where the news stands are groaning with media, packed with tales from across the world, events big and small, all shrieking for attention.

Time, inevitably, is rationed, and one of the things that had to go was the monitoring of British political blogs, which in any event took on an aura of distance and remoteness from the far-flung shores of the United States. But, with all that was going on, one had to smile when, finally catching up, one sneaked a view of Iain Dale's blog for Friday, telling us, "Well there's not much else going on today…". Bless!

Nevertheless, we are very happy with Conservative Home which ran a piece on its best political book of the year, which had Scared to Death as one of two worthy books shortlisted for its award. Thank you CH.

Anyhow, interestingly, front page news in the New York Times yesterday was a long story (carried over on the inside pages) on how the economy was scaling down, driving into recession.

The particular thrust of the story though was how businesses, grappling with declining fortunes, were cutting hours for those on their payrolls. Self-employed people were suffering a drop in demand for their services, like music lessons, catering and management consulting. Growing numbers of people were settling for part-time work out of a failure to secure a full-time position.

As a result, says the NYT, with people bringing home paychecks that do not go as far, "…are forced to economize, eliminating demand for goods and services that once captured their dollars, spreading pain to providers like auto dealers and lawn care providers. They, too, must trim their outlays on pay, shrinking working hours more and furthering the slowdown". 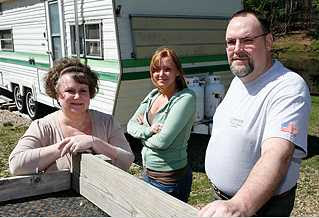 The paper shows Kim Baker (pictured with his daughter Bailey and wife, Debbie), who works at a roof tile factory with declining business. "We don't just hop in the car and go shopping or get something to eat," he says.

What has special resonance is that this story, published yesterday, is almost a mirror image of today's story in The Daily Telegraph, headlined: "Financial crisis forces Britons into austerity".

Uncannily, the emphasis of the story is exactly the same, as we are told that, with the cost of living going up by £1,800 a year for the average home, families are changing their spending habits to cope with the economic squeeze. "Middle-class customers are turning to budget supermarkets, discount stores, low-price hotels and car rental firms, all of which have had booming sales in recent months…".

For us, if course, we can only say to the MSM, what took you so long? We were writing about this in February, when it was already apparent, but it is fascinating how the media on both sides of the Atlantic are now taking up the cause. 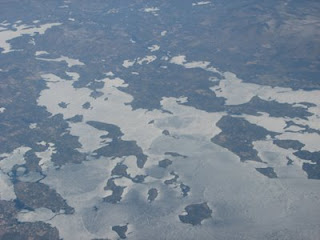 As for Global Warming – the issue which took us to Washington - from the reaction of the people we spoke to throughout the US, including more than a dozen talk-show hosts, by whom we were interviewed, the impression is that the tide is on the turn. As in the UK, public sentiment is very much against the hype, and the recent winter has raised the public profile of the sceptics.

In Washington, we sat basking in glorious spring sunshine, with temperatures in the high seventies (and not a single Celcius temperature offered – bliss!) but, flying back, even now we could see the residue of the great snows. Most of the free water in Maine is still ice-bound (pictured, above left) and TV weather forecasts in some States are even now issuing snow warnings.

Back now in cold, grey Yorkshire, it is a different world – but, as the NYT and The Daily Telegraph unwittingly confirm, we have so much in common.