She chose the wrong day … 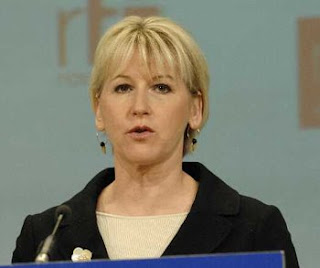 Up on the Euractive site recently was a glowing puff about the fragrant Margot who was happily warbling that her "Plan D" had been a "success".

It had succeeded in its goal of organising a "broad public debate on the future of the European Union," said the fair Wallström, speaking at a press conference on 2 April. She highlighted a number of Plan D's key achievements in the 2005-2007 period, notably "increased internet debate, increased contact with national parliaments and civil society, increased dissemination of information to European schools and a number of cross-border citizen consultation projects."

Thus she burbled: "We are now beyond the reflection period," noting that the commission had learned a number of lessons, above all the need to achieve a "more active European citizenship" through consulting and empowering citizens in EU policymaking.

Helping herself to large doses of magic mushrooms, she went on to say that Plan D had helped to "change the perception that the EU debate is too abstract from EU citizens," adding that it has represented a significant step towards "building an open European public sphere".

If ever there was a sign of the total detachment of our European political classes, this surely has to be it. With our finger on the pulse of EU affairs, as you might expect, we find that European Union issues – never well covered – have almost disappeared from the public consciousness.

Days go by in the media without the slightest reference to the EU. A visitor from another planet might be forgiven for not realising that we were even in the EU, much less that it was our supreme government, such is the paucity of coverage.

Of course, as Booker observed last Sunday, the very last thing in the world the EU commission wants is a frank and open debate about the future of the European Union. But it is nevertheless remarkable that Wallström, in her little bubble, can really believe – if she does – that she is reaching out to the great unwashed.

Clearly, her press conference was a day late. April 1 would have been more plausible.