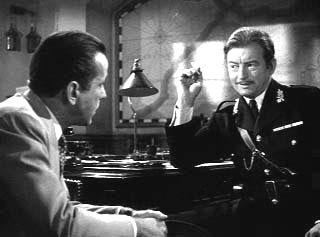 I am shocked, I tell you, shocked. It seems that after years of denying it, OLAF has admitted that, ahem, yes, actually “senior official did ask to see documents obtained by Belgian police when they raided the offices of a German investigative journalist”.

We are once again talking about the case of Hans-Martin Tillack, the German journalist whose painful saga we followed assiduously.

According to the European Voice, a spokesman for OLAF, Alessandro Buttice, “told the head of the international journalists association API in an email on 28 March that a director at OLAF had requested access to the files of Hans-Martin Tillack”. This had been strenuously denied by Franz-Hermann Brüner, OLAF's director-general, and Siim Kallas, the European commissioner for the fight against fraud to journalists, the Toy Parliament in Strasbourg (or was it Brussels?) and the Court of First Instances.

Herr Brüner has now realized that some of his statements were or, to be precise, “one element” in his statements was not factually correct. That was, as it happens, the most important element to do with OLAF’s involvement with the Belgian police’s “investigations”.

How did they find this lack of factual correctness? Well, it seems that a new broom appeared.

The error was detected when Thierry Cretin, who was appointed director at OLAF for investigation and operations, reviewed the case. The request was made by Cretin's predecessor Alberto Perduca, who is now working at the EU mission in Kosovo.

Well, it’s good to know that old officials of OLAF, however improperly they may have behaved do not die or even fade away. They just go to another EU appointment. But then you knew that, I expect.

Interestingly, Herr Brüner apologizes for misleading the International Federation of Journalists and the International Press Association but makes no mention of the fact that he and Commissar Kallas also misled the Toy Parliament and the Court of First Instances. Normally, it is considered to be rather bad form to mislead a court of law.

Needless to say, there will be an internal enquiry.
Posted by Helen at 16:35