The contradictions of environmentalism 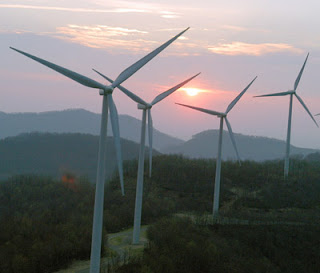 No more so is this apparent than in today's decision of the self-styled Scottish government to refuse planning permission to build the largest land-based wind farm in Europe on protected moorland at Barvas Moor in the Isle of Lewis.

Ironically, despite wind farms being a central element of the EU's renewable energy strategy, the main reason cited as to why the plans to build the £500 million 176-turbine farm were thrown out was that they were incompatible with EU law. Barvas Moor is designated as a Special Protection Area under the EU Bird and Habitats Directives.

Said energy minister Jim Mather, "European legislation requires a specific procedure to be followed when proposals which could potentially affect Special Protection Areas come forward." He had "…considered all the relevant issues and concluded it would not be possible to approve this application." "The Lewis Wind Farm would have significant adverse impacts on the Lewis Peatlands Special Protection Area, which is designated due to its high value for rare and endangered birds."

This puts the Scottish government in some difficulties, albeit of its own making. It has turned its back on nuclear energy and, as recently as November last year, increased its renewable target from 40 to 50 percent by 2020, with an interim target of 31 per cent by 2011. That latter target equates to 5,000 Megawatts in installed capacity.

At the time, the government confidently asserted that the absence of new nuclear power stations would not cause an energy gap in a Scotland as it had the natural resources and ingenuity "to become a non-nuclear energy exporter".

With the Lewis decision, however, the Scottish Chambers of Commerce is exhibiting some nervousness. Criticising the decision to reject the wind farm, chief executive Liz Cameron said: "We cannot afford for the Scottish Government to play fast and loose with the security and reliability of our future electricity supplies and run the risk of the lights going out in Scotland."

Mather nevertheless continues to exude confidence in the Scottish Government's commitment to developing renewable energy. Already, 13 applications have been approved, including the second and third largest wind farms in the country. But, with EU environmental law constraining his freedom of action, it remains to be seen whether Scotland can get anywhere near reaching its new renewables targets.

Instead, it may become the first "environmentally sound" region to enjoy prolonged blackouts, bringing it closer to the Greenie dream of forcing us back into the Stone Age.