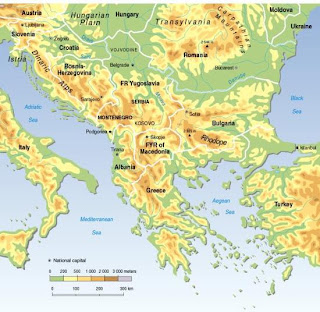 It’s hard to tell how one should react to the various and variegated news from the Balkans. They could be treated as a big joke or as something created especially to try us all. Then again, many a European and world tragedy emerged from that difficult peninsula.

First things first. Serbia has signed a Stabilisation and Association Agreement (SAA) with the European Union. The 27 foreign ministers, who met today decided that Serbia, too, should be placed on the road to possible, if somewhat distant membership of the European Union.

Today, I am proud to announce that Serbia has finally signed the Stabilisation and Association Agreement with the EU. The Agreement sends a clear message: Serbia's future lies in Europe.

The message delivered today by EU Foreign Ministers was clear and unambiguous - they want Serbia to take its rightful place among them as a full and equal partner. There can no longer be any doubt about our shared commitment to make Serbia an integral part of a stronger and bigger EU.

For the citizens of Serbia the agreement will give greater freedom of travel, closer economic integration and removal of trade barriers, and most importantly the prospect of more employment. By signing the agreement today, we have reconfirmed our commitment to further reform and progress and prevented a path of economic isolation.

It pleases us particularly as we have delivered on this promise to the citizens of Serbia, ahead of the elections.

Now it is up to all citizens of Serbia to think carefully about the real long-term interests of our country and choose accordingly.

Well, of course, the man is fighting an election and the outcome is not at all clear. But this has always been the theme of the post-Communist countries – we want to be part of Europe. Sadly, the EU, incapable of seeing relations with neighbouring countries except in terms of them joining or not joining, never offers alternative agreements that would also make the "newcomers" feel as if they were part of Europe.

The only common foreign policy the EU can agree on with regards to neighbours (the most important aspect of one's foreign policy) is that of an amoeba: endlessly changing shape.

Meanwhile, the aspirant countries see possible membership as a kind of an El Dorado or Shangri-La – it will sort out their problems and give them lots of money to develop economically. Sadly, the reality is very different and the Serbs (and the Croats, the Bosnians, the Albanians) will find out, if, indeed, the EU lasts long enough for them to become members of it.

There are one or two other problems. Firstly, what happens if Tadic’s party loses the election to the more nationalistic groups and the question of Kosovo raises its head again. There is no evidence that it has been solved. Secondly, what is Russia, Serbia’s best friend (though not necessarily in need) going to say about all this?

The Serbs may be happy but neither the Greeks nor the Macedonians are. We have followed this convoluted saga on the blog. Yesterday’s Wall Street Journal carried an article by the Greek author and journalist, Takis Michas, which tried to explain the various problems that prevent the two countries from agreeing on any kind of a peaceful coexistence. They are not about to go to war but neither are they at peace.

It is about much more than just the name, the argument about which is something of a red herring. It is about that elusive Balkan entity – national identity, something that was supposed to disappear in the twenty-first century but, which, to the contrary, creates endless problems in countries, who spend a great deal of time re-writing and re-re-writing historic events and developments the better to define their identity.

Contrary to received wisdom, the dispute between Greece and Macedonia isn't over a mere name, but concerns competing national mythologies, symbols and histories. In other words, we have here all the usual Balkan issues over which people in this part of the world and elsewhere have butchered each other in the distant and not-so-distant past. No easy fix is possible, and a compromise over the name won't put to rest the basic conflict. Unless all the problems are addressed openly and honestly, mutual distrust will persist, ready to erupt again at the first opportunity – or once EU reconstruction funds dry up.

Had Athens and Skopje engaged in serious bilateral or multilateral talks during the past decade on all the points of contention, and not focused simply on the "name", perhaps they would not find themselves in their current, absurd predicament.

Then again, with EU reconstruction funds drying up, the two countries might be forced into some kind of accommodation with each other.
Posted by Helen at 01:07