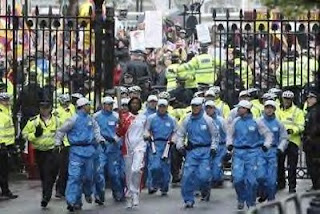 Yesterday I attended the inaugural Thomas Jefferson lecture, organized by The Freedom Association. Being more of an Alexander Hamilton supporter, I am never quite sure about Jefferson but you have to give the man his due – he wrote very beautiful prose.

Pace former President Giscard d’Estaing, who had the temerity to compare himself to Jefferson, the latter did not write the American Constitution, was, in fact, mildly against it, and was in Paris at the time of the Continental Congress and the debates on the Constitution. Nor did he sign it on behalf of Virginia. John Blair and James Madison Jnr did.

What Thomas Jefferson was the author of was the Declaration of Independence, not a document M Giscard has any familiarity with. Mind you, even the American Constitution is written in a pellucid language and proclaims its aim in ringing tones.

We the People of the United States, in Order to form a more perfect Union, establish Justice, insure domestic Tranquility, provide for the common defence, promote the general Welfare, and secure the Blessings of Liberty to ourselves and our Posterity, do ordain and establish this Constitution for the United States of America.

Somewhat different from the Constitutional Reform Lisbon Treaty or, indeed, any other treaty. No nonsense about the People or Blessings of Liberty there.

Anyway, back to the inaugural lecture. It was given by Tim Montgomerie of Conservative Home and concentrated on the subject of anti-Americanism in this county as well as Europe and the rest of the world. Tim also made some tentative suggestions as to what might be done to counter it.

I have always maintained that there was more visceral anti-Americanism in Britain than in most Continental countries, which is a curious paradox as the historic and present links between the two countries are so obvious. This is a long and complicated subject that needs serious discussion but let me just make one point.

The two cultural developments of the twentieth century that are undoubtedly America’s though they both have a presence in other countries are films and jazz. Neither, incidentally, is in particularly good shape, but that is another story. Much more to the point is that both are taken very seriously in almost all European countries but not in Britain. Despite the appallingly low standards of present-day popular culture in this country, there is a sniffy dismissal of what Americans have achieved in those fields.

Tim did not talk about such trivial matters. Instead he mentioned that an astonishingly high proportion of Europe’s and other countries’ population sees America as the greatest threat to peace, ahead of Iran, China, North Korea or Russia.

Happily, there is news in yesterday’s Spiegel that manages to counter that rather bizarre view. It seems that in the wake of the crack-down in Tibet and general misbehaviour by Chinese thugs around the Olympic torch processions the Europeans have changed their minds.

China has now overtaken the United States as the greatest perceived threat to global stability in the eyes of Europeans, according to the opinion poll commissioned by the Financial Times.

The poll, carried out by the Harris agency between March 27 and April 8 and published on Tuesday, found that 35 percent of respondents in the five largest EU states see China as a bigger threat to world stability than any other state. Last year, that figure was 19 percent, and in 2006 it was only 12 percent. In contrast, the US has slipped back into second place, with 29 percent of the respondents viewing it as the biggest threat, down from 32 percent in 2007.

The poll was carried out in Germany, France, Italy, Spain and the United Kingdom shortly after the brutal suppression of the unrest in Tibet in mid-March. Many of the respondents would have seen images of subsequent protests against the Olympic torch relay.

Honestly, one can’t trust these Europeans even to be consistently anti-American. Emotional bunch.
Posted by Helen at 02:13