News from the seat of the great and the good 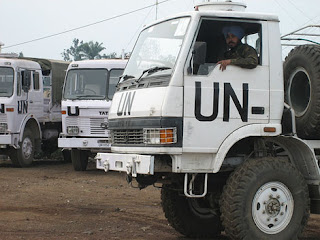 For once it is not the IOC, possibly the most corrupt of all the tranzis, that the posting is about. We are back with our old friends, the United Nations, an organization that keeps trying to set itself up as the conscience and law-giver of the world.

First of all, we need to point out that the Head of UN Operations in DR Congo has denied that there had been a cover-up. Normally, when something is denied publicly, we can assume that it must be true. The fact that the BBC (the BBC?) is bringing us this story with a great deal of scepticism gives one furiously to think.

UN troops in DR Congo have been accused of all sorts of matters: rape and extortion of sexual favours in return for food, often from minors; smuggling of gold and ivory; sale of arms and ammunition to the various rebel groups in the country.

Alan Doss, the Head of Operations, said "that he had personally never experienced any political pressure to abort or adjust the findings of any investigation". In any case, he added, all these accusations are old hat.

Just because some troops (believed to be from India and Pakistan) have behaved badly – and Mr Doss went so far as to acknowledge that – it does not mean that we should blame whole countries for that.

We would agree with that, though we hope these arguments will apply when the odd American or British serviceman (or woman) is found to behave badly. The countries in question should not be blamed for this.

However, there is something to be said for blaming the UN. After all, there has been a long string of accusations levelled against UN peacekeepers and little enough has been done to sort the problems out, despite Claudia Rossett's and UN Watch's valiant campaign.

The UN, if it is even to pretend that it sends out peacekeeping troops and does something practical in the world, cannot afford to alienate countries that supply those troops, no matter what the accusations against the troops might be. It is, therefore, easier to try to suppress the investigations or come up with fatuous self-righteousness:

And the head of the United Nations division responsible for investigating corruption and mis-management, Inga Britt Ahlenius, has also defended the UN against the charges.

She said reports she had commissioned which showed a picture of considerable disarray in the organisation - and which have been seen by the BBC - refer to difficulties which are now in the past, and that new managers are in place.

Well, that's all right then. We know our money is safe with the likes of Ms Ahlenius.
Posted by Helen at 21:41