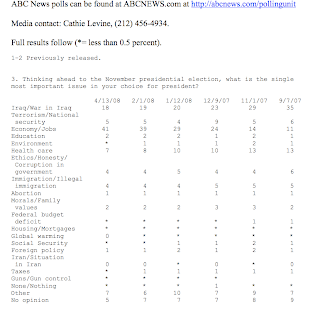 I had not seen the poll – honest! But, courtesy of Tom Nelson's blog, we get the latest ABC News poll (click to enlarge), listing those issues of importance to voters in the US presidential elections in November.

Asked to nominate "the single most important issue in your choice for president?", easily the greatest concern offered by respondents was the category "economy/jobs" at 41 percent. Iraq came a poor second at 18 percent.

As for global warming, you can readily see how important this is to the ordinary voter. It scores a very big, fat zero. For the American public, the issue is not on the political radar – it is a non-issue.

As for us, only a few hours ago, we were writing of jobs and the economy: "make no mistake, this is going to be the defining political issue for the elections on both sides of the pond". Of global warming, we noted, "public sentiment is very much against the hype".

Let no one say that our political antennae are not finely tuned.