The debate goes on without us 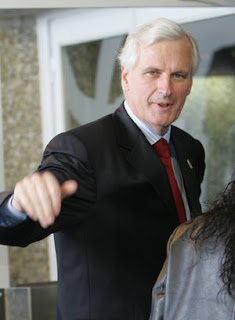 An interesting comment on the Margot Wallström blog refers to the formation of a new Dutch movement, "Proud of The Netherlands" (or TON in Dutch), capitalising on the general, if unfocused dissatisfaction with the political classes.

But, if the Dutch voters are not happy, observes the commenter, "the European Union has very little to do with that, since Europe as a subject of political debate seems to have gone back to pre-referendum obscurity."

That, of course, was the objective of operation apathy and, of all the policies the EU ever dreamed up, it is perhaps the only one which has ever succeeded – an one which the British media have embraced with gusto. Rarely has there been so little written about the EU in the British press and that which finds it way into the newspapers is largely of such banal triviality that even Margo is having a field day.

The huge danger though is that the debate goes on without us, most notably centred around the headline issue of the "global food crisis". This has the makings of the perfect beneficial crisis - for the whole of the tranzie class. For the EU, it offers the ideal platform for its next major power grab, led by France and Germany, setting the shape of the EU budget for 2013, when the current funding regime runs out, and thus the shape of the EU itself.

These two countries, performing their classic roles as the "motor of European integration" are already manoeuvring for position in the forthcoming negotiations over the EU budget, the British rebate and the next steps (not) in CAP "reform" – held over until the constitutional Lisbon treaty ratification is in the bag.

Make no mistake, these issues will determine for the next decade or more the continuation of what is still one of the EU's main (and most expensive) policy areas, the CAP. And, since the agricultural policy dominates the EU budget, the resolution will also decide, amongst other things, who gets the lion's share of EU funds (France) and who pays the bills (the UK).

Already, we have seen some ranging shots, first from France and then from Germany.

Then, yesterday, through Deutsche Welle, the commission pitched in, fronting Michael Mann, spokesman for the EU agriculture office in Brussels. Almost gratuitously, he informed the waiting world that, "There is no connection between EU agricultural subsidies and the rise in food prices or the food shortage in developing countries," thereby denying something that no serious commentator had thought to be the case.

Clearly, though, there is method in the madness: up pops
Michael Barnier (pictured) a former French foreign minister, ex-EU commissioner and member of the French governing centre-right UMP party. He launches into a pean in support of the CAP (major beneficiary France).

Barnier rails against "critics of the CAP" who are prepared to use surging food prices and threats of shortages to seek freer trade in agriculture, and then declares that the developing world should draw inspiration from Europe and form self-sufficient regional agricultural blocs funded with a redirection of development aid.

"I think [the CAP] is a good model," he says. "It is a policy that allows us to produce to feed ourselves. We pool our resources to support production. West Africa, East Africa, Latin America and the southern shore of the Mediterranean all need regional common agricultural policies."

He then tells us that "he would not allow" (note the "he") Europe's system of subsidies and barriers to trade to take the blame for "disorder" surrounding the commodities spike in prices and associated unrest in some countries.

"What we are now witnessing in the world is the consequence of too much free-market liberalism," he pronounces. "We can't leave feeding people to the mercy of the market. We need a public policy, a means of intervention and stabilisation."

For those inane (translate: brain-dead) British politicians who have over the decades soberly assured us that, "Europe is going our way", here is the wake-up call. This is state intervention and protectionism all rolled up into one. And with France in the driving seat - holding the EU presidency from 1 July – that thinking is going to be driving the agenda.

The worst of it is that Barnier, like so many others of his ilk, have lost sight of the CAP is really for. In fact, with its origins lost in the mists of time, there are few in either the commission or the member state capitals who understand it. After decades of misplaced and entirely false EU propaganda, they have come to believe that it truly is an instrument for promoting agricultural production and avoiding food shortages.

In fact, as we have pointed out, the policy was not designed to deal with shortages. It was constructed to deal with over-production and surpluses and to mitigate their financial and political consequences. However, at the moment, we are moving from a situation of global food surpluses to one of structural shortages (brought upon largely by the biofuels and renewable energy policies of developed nations - of which more in a later post).

Thus, we find that the EU is promoting a policy designed to deal with agricultural surpluses as the primary tool for dealing with expected food shortages. This is akin to turning on a fire hose to deal with a flooded cellar or, if you prefer, dousing a fire with petrol in order to put it out.

This cannot work – it will not work. It is the wrong tool for the job. At best, it will have no effect (but cost us a great deal of money). At worst, it make things inestimably worse. (I will publish an analysis of the mechanics, when I can get to it, but things are crowding in at the moment.)

The worst of it all though is that, while these are vital policy issues which are going to shape our lives and determine our prosperity, our own political classes and media have taken a vacation. They are avoiding grown-up issues. And, with the debate going on without us, we are about to get shafted (again). We going to be serious losers as a result.