"Fire and ice" threat to the world 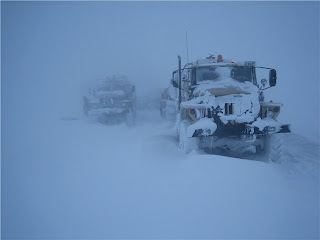 On this blog and elsewhere, we have had a number of discussions as to whether inflation or recession presents the greater threat to the global economy.

One school sees the explosive growth in commodity prices fuelling runaway inflation while the other fears that "contagion" from the US credit crunch will drive down growth and precipitate a global recesssion. In that latter scenario, reduction in demand will curtail commodity prices, resolving any inflation problems.

Interesting it is that the ECB remains wedded to a policy of controlling inflation, steadfastly refusing to cut rates in a strategy that is driving the euro to new highs against the dollar and pound (at 3:45 pm the euro had reached 80.36 pence, up 0.6 percent on the day and more than 9 percent so far this year). This, Damian Reece of The Daily Telegraph believes will rank as "a policy blunder of the first order", while Ambrose Evans-Pritchard (back on form) reckons Europe "risks a replay of the ERM crisis in the early 1990s".

The IMF, on the other hand, is hedging its bets by warning that the world economy is trapped between "fire and ice" – the threat of slumping growth and rising inflation. In other words, it is not an either-or situation, but both.

It too is watching rising food prices and does not believe in the "Goldilocks theory" that developing nations' growth will help keep the world economy afloat, also arguing against the economies of rich and poor countries "decoupling". We are all in the boat together.

We can perhaps take comfort in the fact that the IMF – like most financial institutions – rarely get it wholly right, but it is worth noting something from out of left field, that "experts" are now acknowledging that temperatures in 2008 are likely to be cooler.

This is something even the BBC's Roger Harrabin had to admit recently, picked up by The Devil and others when he carried out a silent edit to his copy, to play down the fact that we have had no warming for ten years.

But what no one seems to be doing is putting together the experience of what happened in the winter just past and what might happen in the next. Because the winter crisis was so poorly reported, it has probably not fully registered that there is a higher than average chance of a poor global harvest this year and that, should the run of cooler weather continue (which it looks like doing), harvests in the immediate future might be poor as well.

Needless to say, as the New York Times has observed, the higher food prices are dragging in additional production, which may go so way to mitigating the effects of poorer yields, but there is nonetheless a real possibility of a global shortage of food.

Under those circumstances, the IMF may be close to the truth in predicting both global recession and inflation, a nightmare scenario for which conventional economic tools are ill-suited to address. Then, as they say, things will start to get interesting.