The way we are governed 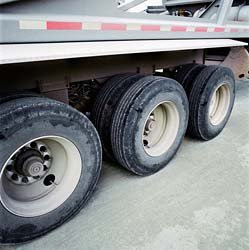 A long-running controversy about the "environmental performance of tyres" has just burst back into the open, with the European Tyre & Rubber Manufacturers' Association (ETRMA) protesting against EU commission’s proposals for reducing the rolling resistance of truck tyres.

This, on the face of it, is one of those boring, technical issues best left to the technocrats, and of no concern to ordinary mortals, much less the high-flying politicians of Westminster, who are concerned with much weightier things.

In fact, though, this is the very stuff of politics. Behind the ETRMA's disquiet (which may or may not be self-serving) are a number of complex and highly controversial issues which have a direct and continued bearing on many aspects of our lives – not least in deciding whether some of us live or die.

At the heart of the current controversy is the EU commission's obsession with driving down carbon dioxide emissions from road vehicles. With vehicle manufacturers reaching – or very close to reaching – the technical limits for reducing emissions from engines, the commission is turning to other aspects of automotive technology to achieve more cuts, and has fastened on the option of reducing the rolling resistance of tyres as an option.

The problem for the tyre-makers, however – or so they claim – is that the goals set by the draft proposals for truck tyres are simply not technically feasible with current technology. Furthermore, should they ever be met, tyres with less resistance on the road would be at risk of losing their grip when the surface is wet, significantly raising the risk of accidents.

Furthermore, the commission is not just pushing the envelope on rolling resistance. It is also proposing to require a substantial cut in the noise level from truck tyres, from a range of 75-79 decibels to 70-73. This is also of some significance as tyre noise when vehicles are travelling from mid- to high speed is very often more dominant than engine noise, thus affecting the quality of life of the many people who live near main roads.

This, therefore, is quite evidently a controversial issue and one which needs resolving, not least as the tyre manufacturers say that much or more of what is being attempted could be better and perhaps more cheaply achieved by changing the materials used in the construction of road surfaces, an option which would require a change in direction on public spending.

However, the interesting and highly relevant point – for this blog – is that, while our own transport ministry is involved and various lobby groups are all making their pitch, the one organisation that should be representing our views, and eventually making the decisions, is not in any way involved.

We write, of course, of our own parliament. As with the food additives, it has no locus in the matter, it is not consulted and is not involved in the debate, which is focused entirely on Brussels.

In the fullness of time, when our central government in Brussels has made its decision – with some input from our own provincial government (although the issue is decided by qualified majority voting) – technical regulations will be handed down, which will not even need to be approved by parliament. The new standard, whatever it might be, will become the law of the land the moment it is "done in Brussels".

And that, dear readers, is the way we are governed. Unsurprising it is that MPs are increasingly seen as irrelevant. That is precisely what they are.