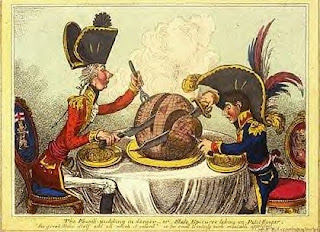 As we have mentioned before, Charles Crawford’s blog is always worth reading. Would that it were true about other British political blogs that seem to descend into dull gossip at the drop of a hat.

Mr Crawford is that unusual personality, a career diplomat, now retired from the FCO, who has thought very carefully about certain issues. As a consequence, he used to upset his superiors on a regular basis and is now managing to make some very interesting points.

All his postings are worth reading, including Tuesday’s elegant dismemberment of Polly Toynbee’s article and entirely justified attack on the pink girliness of some toys. I, too, banned, Barbies, Sindys, Care-Bears (or yuk-bears), My Little Ponies (or my little pukies) from our house and I, too, was somewhat astonished when a ball with a ghastly little pony appeared as a present from a friend who never stopped proclaiming her feminist ideology. The ball did not last long, I am glad to say.

However, that is a digression. The posting I was really interested in is Charles Crawford’s latest on the BAE and Saudi Arabia saga, in which he muses on different diplomatic behaviour and why it is that Britain seems to be so unsuccessful these days. Well, he ought to know.

To start with he looks at American and Russian ways of doing things and why they are successful:

“Part of getting what you want is projecting a sense of Power and Purpose, so that when a negotiation starts others feel cowed by your self-confidence. You establish up-front a psychological initiative. You evince inexorable success.

It helps to be Powerful to start off with. US diplomats enter a room armed with self-belief, to the point sometimes of sheer obnoxiousness. But there is only one USA. The rest of us have to make do with more modest means.

The Russians too are outstanding negotiators, but in a different sense. They are taught negotiating technique in a way which is quite foreign to British and European methods.

Russian diplomats' First Rule of Negotiating is simple and profound: "Never move position, even when you agree with someone, without trying to extract something first."

This attitude gives them all sorts of advantages. Above all they usually convey the impression (a) that they are tough, and (b) that they move only on their terms. Plus they come over as (c) ready to take considerable pain in defending their principles, while (d) being ready, nay keen, to hit you harder (and if possible below the belt) than you hit them.

Which is why Russian diplomats are rarely kidnapped or humiliated. Even the dimmest terrorist out there knows that if he does something bad to the Russians, they will not hesitate to something Very Bad, and preferably very personal, to him - and his family.

This makes a mockery of the whole concept of diplomacy. Mr Crawford is cheerfully telling us that the only way you can get your way is by having the maxim gun while they do not or a gunboat hovering in the background. Nothing else will work. Actually, in other postings he makes it clear that toughness at the negotiating table, without a gunboat might work as well but we need to be prepared to inflict pain.

This may be true but I am not sure he is right about Russia. The truth is that under Putin the Russians may have roared their terrible roar and gnashed their terrible teeth but got nothing except through outright bribery or very direct threats to cut off the gas supply. Even that works only with Germany.

As it happens there were Russian diplomats kidnapped and murdered in Iraq early in June 2006. It was rather a gruesome affair and the Russian government was rightly outraged.

On June 28, 2006 President Putin “ordered” his secret services to find the killers of the Russian diplomats and liquidate them. The problem was that Iraq is not Chechnya and even in the latter those famous orders to hunt down every last terrorist have not been exactly fulfilled. In another country these matters become very difficult.

In October of the same year Strategy Page reported that “nothing has been heard of any Russian retribution over the last four months” though, given the close links between the Russian and Iraqi security services in the days of Saddam the task should not have been too difficult.

On July 8, 2006 a new law [in Russian but that should not present too many problems] was passed by the Duma, which went through the Federal Council on the 14th and became law on the 27th. This was the Federal Law on Countering Extremist Activity”, which threatened to curtail the reporting of any terrorist action and punish those who “slander” officials. It specifically empowered the secret services to pursue extremists and terrorists beyond the border of the Russian Republic.

There is an obvious problem here. The Russian government can empower all it wants but those agents’ activity may not be welcomed by other countries.

So far as it can be ascertained the kidnappers and murderers of Russian diplomats have not been hunted down by the FSB or any other Russian organization, though, obviously, they might have been killed for other reasons. What did happen was the murder of Alexander Litvinenko in London in November of that year.

Mr Crawford's analysis of why the British manage to gain anything through diplomatic negotiations is pithy and, to an outsider, completely accurate:

Our British problem is that we (maybe especially in the FCO?) in a baffling post-modern way are increasingly uncomfortable if not embarrassed with any talk of 'power' (theirs or ours). We seem to be drifting into a hazy miasma of collective ineffectualness. Psychological and practical 'safety' is all. Confrontation necessarily is aggressive (and therefore bad). Winning is undesirable if it means someone loses.

Would it be any different if they had a gunboat or two? On the other hand when was the last time a British diplomat was humilated by a kidnapper? By their allies, yes, but not by the enemy.
Posted by Helen at 01:40