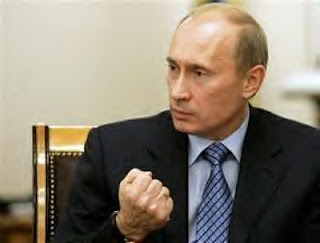 There is just no end to the positions President Putin seems to be acquiring. He will step down as president on May 6, just in time for his teddy bear (President-elect Medvedev) to stand on top of the Lenin Mausoleum for the Victory Day parade, which is awaited with great interest by all.

Now he has accepted another position, that of Chairman of United Russia, the official party in the Russian Duma. This means that he will control the Duma as well as deal with the day to day affairs of government, though Medvedev has indicated that he will be focusing on foreign affairs. Maybe.

President-elect Medvedev has also said in that famous interview with the Financial Times that he would like to see Russia move to a rule of law, a rechtsstaat, as various nineteenth century liberal conservatives called it, arguing that it was the best solution for Russia.

The rule of law and destruction of corruption and “legal nihilism” need to start at the top. One wonders whether President Putin’s future career is really a good example. As Chairman of the governing party, which controls most of the regional governorships, he will be able to bring President Medvedev down, should the man disobey his own prime minister. Contrariwise, President Medvedev will be able to do nothing about Prime Minister Putin, no matter what he or his various supporters might do.

Ignoring the strange rumours that Putin is planning to marry a young gymnast in the very near future despite not having divorced his wife so far as anyone knows, one has to ask one more question. Is Mr Putin also going to take over from Mr Medvedev as Chairman of Gazprom, the second most powerful organization in Russia? And if he does, will he find a second job for his good friend, former Chancellor Schröder?

Meanwhile NATO and the EU are very disappointed because Russia is ignoring how nice they were at the last summit in conducting negotiations with the potential break-away regions of Abkhazia and South Ossetia. This was not supposed to happen. After all, Germany, France and other countries of Old Europe “stood up” to the United States, in order to keep Russia happy.

Instead of being contented “outgoing Russian President Vladimir Putin issued a decree expanding ties between the government and Abkhazia and South Ossetia. The move involves the recognition of organisations and businesses registered in the two republics.”

Which leaves Javier Solana and Nato Secretary-General, Jaap de Hoop Scheffer discontented and rather hurt. One wonders how Chancellor Merkel and President Sarkozy feel. Of course, it is entirely possible that President Putin’s reading of the real outcome of that summit was similar to our own and he has reacted to another diplomatic set-back in his usual fashion of foot-stamping and bullying.

On the other hand, as we have said before, it is unlikely that Russia really wants to separate Abkhazia and South Ossetia from Georgia and assume responsibility for those two regions.
Posted by Helen at 01:46