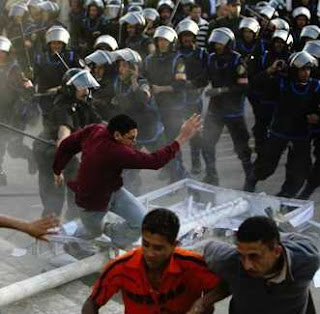 Diving in to a subject when blessed with supreme ignorance is very easy and rewarding. Fortified with indignation and innate prejudice, one can so easily come up with solutions that all the other idiots – the so-called "experts" – have missed, and then rail at their inability to see the obvious.

That is something to which this blogger is particuarly prone and is beginning to happen with the "global food crisis" where, as the issue climbs up the political agenda, various pundits – not least this one - are offering their own nostrums to solve the problems.

Invariably, in support of the "global" part of the crisis thesis, authors – including myself - list the areas which have recently suffered food riots, lumping them together as having that one thing in common (either rising food prices or shortages), as if they are part of one global phenomenon.

A more sanguine look at the situation, however, will tell you that, while civil disturbances may be the common feature of these disparate events - ranging geographically from Egypt to Bangladesh and China – the actual causes are many and varied. In many instances, food shortages and prices may be only incidental to the problem, and are most often symptoms of underlying defects or stresses in the system.

Bringing on this reflection is a recent article in the Egyptian Daily Press (via the blog Subalternate), which points to corruption in an already creaking and inefficient food supply system as the proximate cause of the riots.

The article, written by Daanish Faruqi, a Senior Researcher and Editor, at the Ibn Khaldun Center for Development Studies in Cairo, suggests that the problem which triggered the riots stemmed from the corrupt management of government wheat flour subsidies.

What was happening was that, as the international price of wheat rose to record levels last month, heavily subsidised wheat supplied to government-owned bakeries – and used to make cheap country, or baladi bread, at a very marginal profit – was siphoned off into the black market and thence to private bakeries to service communities which could well afford the price rises.

Badly-paid government inspectors were easily – and cheaply – bribed to turn a blind eye, as a result of which the poorer workers in the industrial towns, and their families, found that they could no longer get supplies of cheap bread and were forced to buy higher-priced bread elsewhere. From that, the riots developed and the poor - who could least afford to do so - were forced to bear the brunt of the price rises.

Of course, the increasing price of wheat was a factor in this, but there are other, more complex issues. Not least is the extraordinary structure of the Egyptian farming sector, illustrated in a detailed study. Although the sector, dominated by very small farms, produces nearly half of Egypt's wheat (and could grow considerably more) most of the product is consumed by the farmers themselves or absorbed by the rural communities.

In fact, one half of Egyptian wheat farmers are net buyers, whose wheat purchases (expressed in grain equivalent) exceed their sales. Most of these households are wheat farmers that do not sell wheat at all and supplement their wheat production with purchases of bread and other wheat products.

As a result, the urban poor are fed not by home-grown product but by government-subsidised wheat bought on the international market, while the private sector also relies on imports, but bought on the open market without subsidy. Where corruption abounds, the situation was always going to be fraught.

In this case, it was exacerbated by the fact that Egypt has one of the highest wheat per capita consumption levels in the world and, out of a total consumption of wheat in 2005/2006 estimated at 13.9 million tons, nearly seven million tons was imported, of which the government controlled (i.e., subsidised) wheat was only about 2.5 million tons.

Thus, it is fair to say that the recent "food riots" were triggered by a combination of local factors, that combination being unique to Egypt. Some elements will undoubtedly exist in other countries, especially the endemic corruption and government intervention.

Examining each of the different areas where there have been civil disturbances, it is undoubtedly the case that multiple (but different) factors will have been at play. Food prices or local shortages may have been only a small factor, or symptomatic of more profound, long-standing structural problems.

All this goes to say that there is no magic wand when it comes to resolving issues in the developing world. Nor can it be said that aid, per se is always (or ever) the answer.

Egypt is a country with a growing economy and record-breaking foreign investment. But it also receives massive US aid. It gets $1.3 billion annually in military aid and, in addition, the U.S. Agency for International Development provided over $25 billion in economic and development assistance to Egypt between 1975 and 2002, a sum now increased to over $28 billion.

Simple nostrums, therefore, are not always the right ones. The "global food crisis" brought on by higher prices and local shortages is an issue, but there are other factors which may be as important, or even more so.