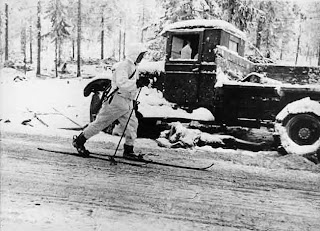 Would it not be a good idea to have a common European foreign policy? You know it makes sense. Think of all those times that Europeans would like to play a strong part in world affairs and … well … never quite manage it because the world and its affairs are not terribly interested or interested only in some things said by Europeans. So, if they all combine and speak with one voice, all those problems will disappear.

What this argument manages to leave out is the very important question, mentioned on this blog more times than we can comfortably link to in a single posting, of what the Single European Voice is going to say.

This problems has become particularly important since the entry of the various post-Communist (sometimes the “post” bit is a little elliptical) states, whose attitude to the world and its various powers are somewhat different from that of France and Germany.

There is the case of Russia. Edward Lucas, author of “The New Cold War”, thinks that we need a strong, united European Union because that is the only way we can stare Russia down in her most bullying mood. But would we?

It is entirely possible that the foreign ministries of Finland and Estonia have been reading Mr Lucas’s book, as they have come up with a proposal that he would most likely agree with.

They have called for a common EU policy on Russia but, one must assume, they would prefer their own view to be the one that prevails.

A strong EU is in the interests of both Estonia and Finland, Alexander Stubb, visiting Finnish Foreign Minister, told reporters after meeting with his Estonian counterpart Urmas Paet in Tallinn.

If the EU wants to be an authorized power on the international stage, it should have a common foreign policy especially on ties with Russia, Stubb said.

EU member states' policy towards Russia may vary due to their own situations, but such policy should be in conformity with the EU's collective approach, he said.

Mr Stubb explained in a little more detail what he had in mind:

Finland's Minister for Foreign Affairs Alexander Stubb (Nat. Coalition Party) says that his personal goal is to link Russia more closely to the European system. He does not believe that Russia will ever become a member of the European Union, because he feels that two great powers will not fit into one union.

"I believe in a free trade area, in which goods would move between Russia and the EU without tariffs. The closer the relations that are established, the more solid the dependency", Stubb emphasised at a lunch on Tuesday of the Association of Political Journalists.

While we go along with the understanding that Russia is not really a serious candidate for European Union membership, a view that is quite clearly shared by the Russian authorities (most people in that country have not really heard of the EU), we cannot help wondering why Mr Stubb thinks that a strong common foreign policy will work on creating a free trade area.

Furthermore, even if he cannot recall what it was like to have the Soviet Union on the doorstep, many others in Finland can and some recent developments in Russia have brought those memories back.

If he finds some of these matters hard to work out, he might like to consult his Estonian colleagues who are moving up to an anniversary of the saga of the bronze soldier and, no doubt, remember the Russian boycott imposed at the time as part of President Putin’s bullying tactics that, in the end, got him nowhere.

Meanwhile, what is that common foreign policy towards Russia to be? Perhaps each member state could produce one of its own. Then we could have 27 common foreign policies. Well, at least. I am sure some countries will be able to produce several.
Posted by Helen at 17:28