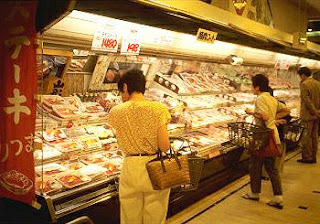 Reviewing the news on what is fast becoming labelled as the "global food crisis", a story in The Times particularly stands out. Japanese consumers, it tells us, are currently suffering a national butter shortage. Supermarket shelves are empty of this commodity and there are no signs of replenishment stocks coming in.

The proximate cause is the massive hike in grain prices which is crippling the Japanese dairy industry and causing near panic about food security.

Says The Times report, "decades of urbanisation, complacency about food, burgeoning imports and dwindling self-sufficiency were once proud boasts. Suddenly, they look like liabilities." It adds that analysts are saying that Japan is emerging as a "useful proxy" for what the food crisis could mean for developed economies because it has gone further down the road of reliance on global food markets — markets that now threaten to deliver turmoil.

One obvious parallel is the UK, which similarly relies on imported foods and to which, "decades of urbanisation, complacency about food, burgeoning imports and dwindling self-sufficiency" apply in equal measure. Where Japan leads, in this case, it seems Britain could so easily follow.