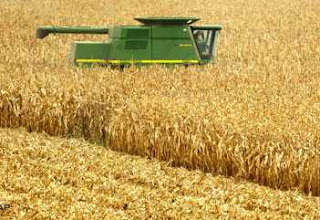 Even if agriculture commissioner Mariann Fischer Boel is behind the curve, France has been quick to talk up reversing the CAP reforms as a means of increasing production.

Now, building on that momentum comes Germany, its agriculture minister, Horst Seehofer, calling for a drastic rise in European agricultural production. To that effect, he also wants to reverse the round of CAP reforms, in a bid to counter rising world food prices and shortages.

This is in an interview to the mass-circulation Bild newspaper, where Seehofer proclaims that, "We need a farming renaissance, and an increase in agricultural production in Germany, in the whole of the European Union and, more especially, in the developing countries."

The German agriculture minister also notes that the EU had induced farmers to stop using 3.8 million hectares (9.4 million acres) of arable land in recent years to counter surpluses in dairy, produce, wine and meat and declares that this land should be brought into production once more. He adds: "We have to produce more foodstuffs worldwide in order to prevent further price jumps."

Here, we have an interesting conflict building as, according to Der Spiegel the German finance ministry is looking to reduce agricultural subsidies in view of the surging food costs, but Seehofer insists that farming in Europe still has to be protected. Agricultural subsidies, worth €50 billion in 2006, "should not be questioned at all, the way it's happening now," he says.

As before, though, we seem to have a problem in EU ministers believing their own propaganda, labouring under the false impression that CAP subsidies were designed to promote production, rather than manage the effects of over-production arising from national subsidies and the world-wide boost in agricultural productivity that occurred after World War II.

In this context, the finance ministry is right. Agriculture, specifically the arable sector, does not need subsidies as long as world prices are buoyant. The current record price levels are already driving increased production and the market, left to itself, is well capable of ensuring that supply matches demand.

By and large, the limiting factor in the arable sector is the huge raft of regulatory constraints – many of them in the name of environmental protection – which prevent farmers bringing land into use, or from adopting more efficient cropping patterns. Yet these are unlikely to be affected by the subsidy system.

More to the point, the particular sectors which have been hardest hit, such as pigs and poultry (including egg production), are those which are not supported by the subsidy regime, while wine and – to an extent – sugar production, which continue to over-produce, are still major beneficiaries of public money.

In short, not only is the CAP focused on the wrong things, the "reforms" fail in any way to address the market distortions that have been built into the system as a result of decades of state support. Since these have a greater drag on production capabilities, reversing these "reforms" and throwing more (or even the same amount of) money at agriculture is likely to have little immediate (or any) effect on production.

Where, as we have stated before, state intervention could help is in providing a temporary buffer for livestock producers, to even-out the wild swings in grain prices and allow producers to cope with their increased input costs.

However, such a scheme is not on the agenda which means that the French and now the German agriculture ministry are simply lobbying for more EU support of farming, to no effect whatsoever.

But then, that is the CAP for you. Primarily intended as a conduit to pour money into French agriculture - with provisions to allow the German government to continue subsidising its own politically important farmers – the Franco-German motor is being predictably quick in exploiting the emerging food shortage to continue an agenda that has existed for decades.

For them, whatever the problem, be it over-production or food shortages, the solution is the same – more of our money. This is the universal solution.