A visit to the real world 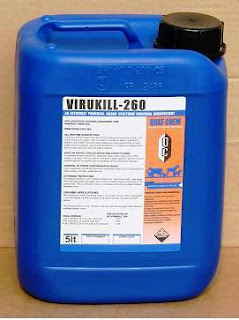 In a specialist Manchester business magazine comes a whiff of the real world – the one that is being steadily destroyed by the regulatory avalanche from Brussels.

The story concerns a small chemical manufacturer which produces a common and garden chemical called ADBAC (Benzalkonium Chloride, for short) – technically a quaternary ammonium compound (QAC) with biocidal properties. It is very widely used – and has been for nearly a century – as an active ingredient for baby wipes, skin disinfectants, such as Savlon, for sanitisers in the food industry and for veterinary use.

As it happens, I know the product extremely well, having once worked with a company producing a compound based on it, for use as a disinfectant skin wipe and even for such sensitive uses as disinfecting respirator masks. We actually took the product through the US EPA registration process, costing hundreds of thousands of pounds – and it passed with flying colours, allowing us to market it as "non-toxic and non-irritant", completely safe for skin contact.

Yet, despite long evidence of safety, this is not good enough for the EU. The company involved, QuatChem Ltd, has fallen foul of the EU's Biocidal Product Directive, which comes into force in 2010. In order to continue marketing its product, it must produce lengthy and costly dossiers on their chemicals, including expensive testing to comply with new safety standards.

A perverse feature of the directive – in common with much EU legislation – is that the cost of compliance is the same for all firms, irrespective of the size or turnover of the company. And, although QuatChem's nearest competitor has a turnover 60,000 times greater than its own, it is still having to find a roughly equivalent sum on registration. So far, it has spent £100,000 and is facing a potential total bill of between £4.3m and £6.5m by the 2010 deadline.

The Oldham-based company, however, only has a turnover of £2m, and is being forced to divert two of its own scientists to the task and is paying consultants for additional work. Plans to create ten jobs and move to bigger premises have been put on hold because of the costs.

Bizarrely, although the base chemical is produced by many different companies – with identical properties – each producer has to go through the process of publishing the same dossiers and duplicating research in order to generate the data for it.

Dr Rubinah Chowdhary, QuatCchem director and part owner, says: "It is a very severe problem. I do not know how a directive like this could have been designed. SMEs have not been factored into this. It is astounding. We have two PhD scientists working on it. They were originally employed to grow the business. The effect on us has been tremendous. This directive seems particularly wrong and unfair."

Welcome to the real world Dr Chowdhary. You join the ranks of fishermen, small slaughterhouse owners, egg producers, dairymen, animal feed merchants, electronics designers and even financial advisors, all of whom have been caught up in the mad regulatory machine that is the EU. It cares not one whit as to whether its regulations or directives are "wrong and unfair".

Your job is to comply or go out of business – preferably the latter.