Well, it must be true 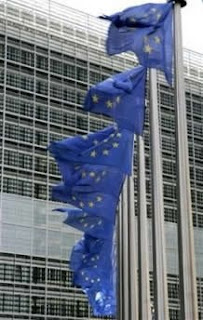 This is official, everybody. Neither the EU flag, nor the EU anthem has a legal status in the United Kingdom or in the European Union. How do I know this? From the House of Lords Hansard, where it is written that Lord Malloch-Brown (or some minion thereof) has so replied to Lord Pearson of Rannoch and, separately to Lord Tebbit, who asked only about the flag.

In fact, Lord M-B went further and explained that:

The EUflag and anthem have no legal status in UK or EU law. [my italics]

So that would be that. No legal status, no need to fly the flag or perform the anthem.

Interestingly, Lord M-B (George Soros's once and future best friend) also told us how the two symbols originated and it does not cast a particularly attractive light on the EEC/EC/EU.

The EU flag originated on 25 october 1955 when the Council of Europe Parliamentary Assembly took the unanimous decision to adopt a flag as its emblem. The Council of Europe's Committee of Ministers adopted it as the European flag on 8 December 1955.

In 1985, the European flag was adopted as the official emblem of the then European Communities by the heads of state and government. EU institutions have been using it since 1986.

Similarly, the Council of Europe adopted Beethoven's Ode to Joy as its anthme in 1972. It was adopted by the Heads of State or government of the then European Communities as the official anthem in 1985.

Yes, I know that there are certain grammatical illogicalities there but that is how the answer appeared in Hansard. Sic, as they say. You just can't get the staff these days. Perhaps, Mr Soros can chip in.

More to the point is the extraordinary lack of originality the EEC/EC heads of state and government displayed here. Let's have a look at what the Council of Europe has and then nick it.
Posted by Helen at 15:33