A bureaucracy that will kill us by the millions 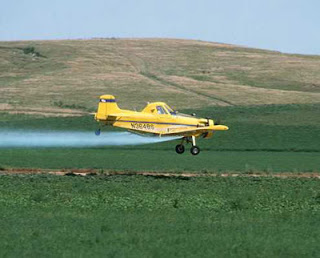 With food shortages, inflation and the dire effect of the biofuels policy very much in the news, the EU is in the process of taking another massive step which will, over time, exacerbate the food shortages which are plaguing the global economy.

This is the framework directive on the sustainable use of pesticides, replacing and adding to the existing pesticide law, Directive 91/414/EEC, to which we have not given anything like enough attention (or any).

The regulatory onslaught about to hit European (and other) nations as a result of this new law will have a devastating effect on food production, and magnify the enormous losses already sustained from pest damage, plant disease and weeds.

What brings this into sharp focus is a report from Reuters today which has a "group of European Union scientists" warning against a planned reduction in the number of pesticides allowed in the EU – which is the necessary and intended consequence of the new law.

They are claiming this could increase resistance of pests and make crop cultivation uncompetitive. "The scientists from seven countries fear that reducing the available range of pesticides could lower their efficiency as it is likely that it will increase resistance," they said in a statement sent to Reuters and to Slovenia's Agriculture Minister Iztok Jarc, holder of the six-month rotating presidency of the EU.

They say the increased risk of developing resistance to the few remaining substances could make cultivation of many crops, including grapes, wheat, barley, cotton, fruit, potatoes and vegetables in Europe, uncompetitive.

"In order to safeguard the production of food at affordable prices, it is essential to provide farmers with access to sufficient diversity of crop protection solutions," the scientists' spokesman Ian Denholm from the UK's Rothamsted Research institute, said in the statement. "This is essential to prevent or delay the development of resistant pests, and to maintain the efficacy of remaining crop protection products," he added.

The point is that, under the earlier directive promulgated in 1991, something like half of all the then existing active substances had been withdrawn from the market in 2003. Many niche substances had disappeared and many more – some extremely safe and intended to replace hazardous products – never reached the market because of the enormous costs of gaining official approval – or "market authorisation" as it is called.

Yet, after the EU commission started the process of revising its pesticide laws in 2006, and the EU parliament added still further restrictions, it was anticipated that between 70 - 85 percent of the remaining 250 pesticides could be lost – with further and continued difficulties in bringing new products to the market.

For sure, there is no argument that pesticides and related products do need regulation, although the current regulatory model adopted by the EU is more than a little suspect. But, while the EU concentrates entirely on the harm done to humans, flora, fauna and the environment, there is another side to the coin.

Few people actually realise the extent to which the economy - and our survival - is dependent on modern agri-chemicals. Already, at a conservative estimate global annual pre-harvest losses of all crops as a result of inspect pests, plant diseases and weeds run to 34.9 percent of potential production.

Another estimate puts the loss at 42 percent, with an additional 10 percent post-harvest loss, bringing the total to 52 percent – more than half the world's food supply. Without the already widespread use of agri-chemicals, the losses would be that much greater, all in the context where, currently, even a few percentage shortfall in existing production is causing a global crisis.

This is actually the measure of the dire, claustrophobic and safety-obsessed approach of the EU regulatory machine, which cannot see the bigger picture and cares little for the unintentional consequences of its actions.

Those action, despite the European focus of the legislation, are likely to be global. On the one hand, without the European market to sustain production, many otherwise valuable pesticides will no longer be available. On the other, through export controls and other mechanisms, the imperial EU tends to impose its law on other countries, particularly in the developing world.

This we saw with the wholly irrational DDT ban, where the effects have been devastating and persistent. In this new directive, we are getting more of the same, and – on current form – we are looking to a situation where our EU bureaucracy will become the most important and direct cause of global hunger (with a little help from our American friends and their EPA).

Back in Washington last week, we achieved a great measure of agreement with members of many of the leading US think-tanks that one of the defining – if largely unacknowledged - issues of this century was the need to devise a means of controlling and limiting our bureaucracies, before the destroyed the societies on which they have become parasitic.

This is an example of where the battle lines must be drawn for, with this and the many other measures pouring out of Brussels, the bureaucrats will eventually kill us by the millions and drive the survivors into poverty and starvation.