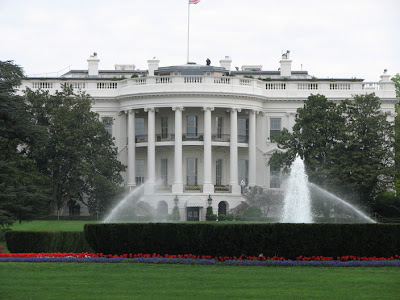 From the lack of coverage so far – rather swamped by the visit of the Pope, which is very big news here – I was beginning to wonder whether I had imagined Brown's visit to the US today, starting in New York with him due to arrive in Washington tomorrow. Here he was though, sitting in the TV studio hot seat, and the first and only really substantive topic was the "draw down" of troops in Iraq.

You didn't get the impression that there was any "edge" to the interview, but American Thinker is definitely pointed. It notes that Brown had "leaked a gratuitous media insult to George W Bush" in The Daily Telegraph, calling for a "revival of US greatness."

Translated by Thinker this means: "Up yours, George!" Its piece continues:

Right on his first trip to the United States, when Mr Brown is expecting to be welcomed by the very man he just ripped. It's typical of Gordon Brown's clumsy political style. He is in big political trouble back home, so he rips the United States a new one. Expect Bush to respond by paying a lot of attention to the Pope.

That bit is indeed happening – lots of coverage of Bush meeting the Pope off "Shepherd One" at Andrews Air Force Base. I guess we will have to wait to see Bush and Brown together.

Cue an editorial in Investor's Business Daily a couple of weeks ago, which rather turns the tables on the nascent anti-Americanism of some Brits. Headed, "Why US view of Britain is tanking", it points out that, while most global surveys on image spotlight negative views of the US, a new poll of US perceptions of Britain shows a plunge.

A BBC World Service poll of 1,000 Americans had US "positive views" of Britain standing at 45 percent, down from 67 percent a year ago. Those holding negative views are at 42 percent, up from 18 percent.

Top of the list of reasons why this should be, according to IBD, is Iraq. Britain is no longer the ally it once was. In the great war on terror, its leaders are going wobbly, despite the valour of British troops in Iraq and Afghanistan. Britain's weakening commitment signals an unreliable partner, which whatever the rationale, isn't admirable.

We're back where we started, with "Good Morning America". Clearly, British performance in Iraq is a major issue and recent events there have not done our image as a nation any good. Brown could well have an uphill task talking to Mr Bush tomorrow. We confidently expect Bush's first words to be "Gordon who?" - and it won't be a memory lapse.