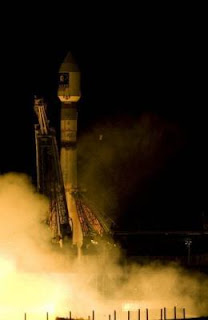 Nearly two years late, after a run of technical and financial problems, the EU's second (and last) test satellite in the Giove series was launched yesterday, the next step in getting their white elephant Galileo satellite navigation system up and running.

Even then, it is a month behind its revised, revised schedule, the launch actually having been booked for March of this year.

The satellite, officially named Giove-B, was put into orbit by a Soyuz rocket in Kazakhstan and is due to test technologies for Galileo such as a high-precision atomic clock and the triple-channel transmission of navigation signals.

Inevitably, as it soared skywards, its land-based sponsors launched a torrent of rhetoric (aka propaganda) to mark this modest achievement.

Despite the upgrades to the Navstar system planned by the US, which will deliver performance enhancements which will match or exceed Galileo capabilities (if the system meets specifications), the EU is still maintaining that its system will offer superior performance.

Furthermore, transport commissioner Jacques "Wheel" Barrot – in his last days before moving over to "Justice" – is putting it about that the system will be profitable.

To that effect, he cites predictions that the European market for personal navigation devices will be worth €135 billion, failing to mention that these consumer systems contribute nothing to the development or upkeep of the primary systems and, in any event, will be used primarily with the US GPS system.

It was precisely the lack of profitability – and the inability of the commission to offer any credible commercial model to private sector contractors which led them to pull out of the convoluted partnership deal with the commission but, according to the Reuters report, this decisive action – which precipitated a major crisis for the project – is dismissed as "industry doubts" over its (Galileo's) viability.

In fact, industry had no "doubts". It absolutely refused to have anything to do with the project unless it was taxpayer-funded, knowing that it cannot generate enough funds to make it a worthwhile commercial venture.

Nevertheless, Barrot is still twittering about "working on putting its products and services on the market in 2013," – a highly unrealistic date for commissioning the system, that is unlikely to be achieved, especially as the commission is still massively understating the overall costs.

Against the estimate of €3.4 billion, the true cost is likely to be in excess of €5 billion and possibly as high as €10 billion, for which the commission has yet to secure a line of funding. There are, therefore, going to be plenty more dramas and crises before we see the system operation, by which time the upgraded Navstar satellites will be flying, providing a free to end-user signal for all comers.

However, there seems nothing capable of shaking the commission out of its fantasy that Galileo will actually make money, leaving its claims totally within the realm of propaganda – about as credible as the EU project as a whole.