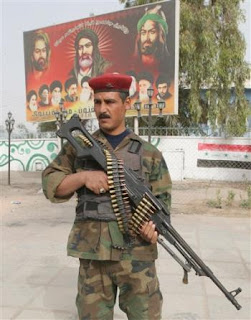 One got the sense from some of the exchanges in the House of Commons yesterday that, barring the more excitable of the breed, MPs have a better handle on the situation in Basra than do most of their media "colleagues".

Certainly, in the exchange between James Arbuthnot – chairman of the Defence Committee – and Des Browne, we saw an element of agreement. Arbuthnot took the view that the Iraqi operation last week was not bad news. It showed the Iraqis taking back responsibility for a key part of Iraq.

Des Browne seemed similarly encouraged, the action demonstrating to him that the (Iraqi) government was showing the whole country and the people of Basra that they are prepared to take on Shi'a militia. They were not, said Browne, "seen to be picking and choosing the elements that they will engage with, but are showing that they are even-handed. Those are all very positive signs."

This is very much the view we prefer to take, with a neat summary on Dean's world and another massively informative post on Talismangate.

The extraordinary negativity of the western media is really quite stunning and, used as we are to the loathsome habits of the MSM, the level of distortion being offered probably sets new levels of venality.

Nevertheless, Browne got a relatively easy ride from the media on his delay in withdrawing another 1,500 British troops from Iraq. But the secretary of state has said that he expects to be able to update the Commons on force levels later this month and my guess is that he will be able to be fairly optimistic about developments.

Whatever the media currently makes of it, it seems something of a corner has been turned.