An MP for UKIP 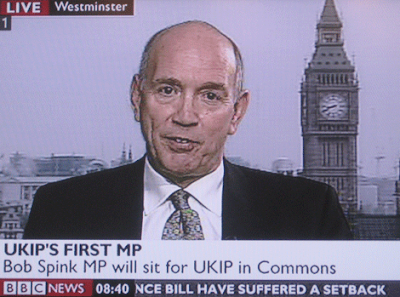 Quite rightly, Conservative Home gives some prominence to the decision by Bob Spink MP, formerly of the Conservative Party, to join UKIP, giving that Party its very first MP. The comments also are worth reading.

This was mooted at the time of his resignation and while there is a good argument for MPs who relinquish their Party whip standing for re-election, the fact is that, under the current system, there is no obligation for them so to do.

Spink is thus completely within his rights to join another Party and, on balance, this is a good thing for democracy, giving UKIP a voice in parliament which it sorely needs.

Furthermore – as Ann Winterton has amply demonstrated – a single MP working alone can achieve a great deal. By use of the parliamentary written question system, by holding adjournment and Westminster Hall debates, by writing to (and meeting) ministers, they can probe, harry and influence in a variety of small but important ways.

Whether UKIP is capable of fully exploiting the bonus of its very own MP remains to be seen, but we are always prepared to be amazed.