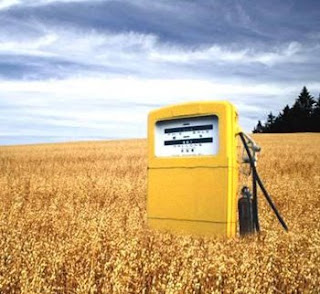 We are informed that the continuing surge in the price of corn, "which is punishing households with higher food prices," is also cutting the profits of American ethanol producers and playing havoc with an industry that was blamed for causing the grain shortage.

The price of a bushel of corn soared above $6 on the Chicago Mercantile Exchange last week, pushed higher by news that American farmers were planting less corn. Farmers planted a record 94 million acres of corn last year but the US Department of Agriculture forecasts only 86 million acres this year as farmers switch from corn to soya bean, another crop that is generating record profits.

Something which we have flagged up on this blog is also noted by this article – that "expensive corn is hurting the livestock industry," which in turn – surprise, surprise – "will raise the price of meat."

We get quoted Rich Feltes, senior vice-president of commodity research for MF Global, who says: "Hog producers are liquidating sows, the farmers are operating in the red.” This, of course, is exactly what is happening in the UK for, while arable farmers are counting their new-found wealth, livestock producers are bleeding to death.

But the fascinating thing is that the skyrocketing cost of corn is also rebounding on the ethanol industry, which is taking an ever larger proportion of the US corn harvest to manufacture road fuel.

Last week Renova, we learn, an AIM-listed ethanol manufacturer, confirmed that it was struggling to secure finance for a 21 million-gallon plant in Idaho, and last month Pacific Ethanol, a Californian producer, disclosed big quarterly losses, cost overruns and bank loan defaults as the cost of corn hit its margins.

Feltes offers the stunning observation that ethanol has turned an agricultural commodity into a fuel. "It's all about the shortage of land created by a rapid ramp-up of ethanol," he says, apparently unconscious of the fact that, if you use food for fuel, you cannot use it for er… food.

The repercussions of that observation are spelt out in a short, down-page item in The Daily Telegraph which has Gordon Brown being warned that, "Rising food prices threaten economic stability and could trigger riots".

Those riots are, in fact already happening but the sentiment mirrors the piece we did over the weekend and notes the World Bank report that the price of staple foods has risen by 80 percent in the past three years.

As we have been wont to observe, for consumers in wealthy nations such as Britain soaring prices are squeezing household finances and keeping inflation up. But for developing nations they can lead to malnutrition and social disruption.

This, according to António Guterres, the UN High Commissioner for Refugees, is already happening, with the cost of food leading to riots. He says: "The biggest problem today is rising food prices in democratic countries everywhere. This can trigger social unrest."

If we also take on board the bad weather over the winter, and the very real prospect that the global warmists have got it dreadfully wrong and we are, in fact, entering a period of cooling, not only are we facing the growing conflict between energy and food production, as ethanol drives up prices, but we are also going to have to confront a sustained loss of agricultural production.

In the round, it is fair to say that the global food shortage is a real issue and, in the coming years, will become the dominant driver of political unrest throughout the world. Yet, in this mad world, what is on its way to becoming a global crisis is still getting only a fraction of the attention it deserves, while international politics is still obsessed by the prospect of what may be non-existent global warming.