The end of the beginning? 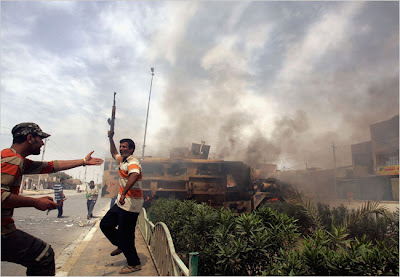 Despite the determination of The New York Times and even our own Daily Telegraph to paint as black a picture in Iraq as possible, Rick Moran of American Thinker and Neo Neocon think our boy dun good.

We tend to agree and said so at the time. We take a quiet pride in being one of the very few British blogs which followed the crisis through from the very start and then saw through the hype.

That Malki judged correctly in taking on the Mehdi Army is now largely confirmed by a report in The Times today – one of several – which has Moqtada al-Sadr offering "voluntarily" to disband his militia, a "surprise" move (to follow his "surprise" move in ordering his troops off the streets) which came after Maliki threatened to exclude Sadr from the political process unless he stood his forces down, garnering support from a coalition of Kurds, Sunnis and Shias, who were willing to back him.

Sadr is attempting to save face by calling on Ayatollah Ali al-Sistani to "advise" him to do so, in so doing referring to a long-standing political enemy in what can only be described as a fig-leaf.

The Mehdi Army itself is under severe military pressure from Iraqi and US forces who are poised to enter its Baghdad stronghold of Sadr City for a final showdown, in a fight that they look to be winning as support for the militia melts away.

According to The Times, an Iraqi police commander whose forces have sealed the eastern approaches to Sadr City said that raids would resume today when a government deadline for the militia to disarm expired. "I think this time they're finished," said Brigadier Ali Ibrahim Daboun. "In all the previous battles, they were attacking and we were on the defensive. Now it's the other way round."

The interesting thing here is the reluctance of the Western media to acknowledge that we seem to be at a turning point, relying on a diet of burning Iraqi vehicles (above - this one is an Iraqi "Badger", the 6x6 version of the Force Protection Cougar, on which the Mastiff is based) to project a pessimistic picture.

It is often said that success has many fathers and failure is an orphan, but here we seem to be seeing the reverse. The largely left-wing US media have a strong desire to see "Bush's war" fail, as do the right-wing British media and politicians (who feel the same about Blair's war), while the anti-war political left is equally embarrassed by Blair's joint venture with Bush.

Even now, coverage of events in the British media is slight, but there is truly a sense that, after five long years, we are approaching an end game in Iraq. To paraphrase Churchill, this may only be the end of the beginning, but even that is progress. One wonders how long though, that Maliki's success will remain an orphan.