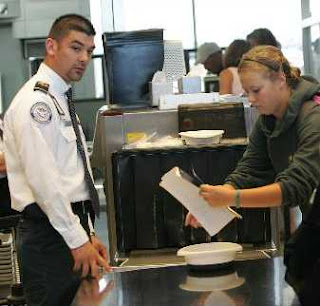 Used as we are to the machinations of our supreme government in Brussels, there is very little that surprises us. But this one, even by EU standards, is a gem beyond imagining – a law produced by the commission which, although everybody was expected to obey it, it refused to publish.

To its credit, this Kafkaesque situation was picked up by the European Court of Justice, specifically by the Advocate General, Eleanor Sharpston – the British barrister who prosecuted metric martyr Steve Thoburn on behalf of Sunderland Council.

The case itself, which attracted uncommonly robust condemnation from Mz Sharpston, concerned a Dr Gottfried Heinrich. On 25 September 2005, he had committed the heinous crime of boarding a passenger airliner at Vienna-Schwechat Airport carrying as part of his cabin baggage some tennis racquets which he intended to use on his holiday.

He had been stopped at the security control and warned that these were "prohibited items" but nevertheless did board with the tennis racquets in his baggage, only to be summarily ordered off the aircraft.

The point – to which Mz Sharpston took very great exception - was that there was no way that Dr Heinrich could possibly know that his tennis racquets were prohibited items.

Although such items were listed in the Annex to Commission Regulation (EC) No 622/2003 of 4 April 2003 "laying down measures for the implementation of the common basic standards on aviation security", the commission had decided that the Annex should not be published. It should only be made available "to the appropriate authorities". This was even despite two amending regulations stating, in their recitals, the need for passengers to be clearly informed of the rules relating to prohibited items.

Dr Heinrich brought proceedings before the Unabhängiger Verwaltungssenat im Land Niederösterreich (Independent Administrative Chamber for the Land of Lower Austria) which referred questions to the ECJ asking whether regulations or parts thereof "can have legally binding force if they have not been published in the Official Journal".

The ECJ had no hesitation in finding that the commission was in clear breach of Article 254 of the EC Treaty, which provides that regulations shall be published in the Official Journal. Mz Sharpston noted that the duty to publish regulations is, "unequivocal and without exception" and thus considered that the failure to publish constituted "a violation of an essential procedural requirement, resulting, at the very least, in invalidity."

However, given that that non-publication had been neither accidental nor unintentional, Mz Sharpston suggested that the Court should go further and declare the regulation to be non-existent.

The "persistent and deliberate disregard of the mandatory publication requirement of Article 254 EC", she said, was one "whose gravity is so obvious that it cannot be tolerated by the Community legal order." Such a step, she added, "would make it very clear that non-publication of regulations or parts thereof - all the more so when deliberate - is unacceptable in the legal order of the European Union."

Certainly, judgements do not get more unequivocal than that, and this one makes delicious reading. But there is a coda to the story.

The only organ of our loathsome British media to report the ruling (so far) is The Times. Yet, over a by-line from David Charter in Brussels, it offers the headline: "Airlines rebuked over hand luggage racket". And, with the airlines almost completely in the frame, all we get on the EU commission on its secret Annex is that it has "agreed to publish the full list soon."

Just precisely what does the commission have to do to get criticised in this town?