A question of subsidy 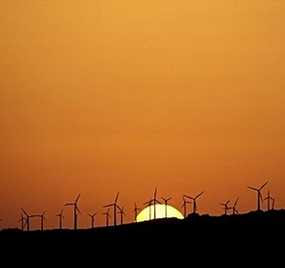 An utterly mad piece comes from Ambrose Evans-Pritchard in The Daily Telegraph today.

Usually our favourite economic commentator (well, mine), he has been in Oviedo, northern Spain, writing an unashamed "puff" for the wind industry, headed, "Spain's gain from wind power is plain to see".

Windmills pay, he writes: "On a breezy Saturday at the end of March, Aeolian Parks scattered across the hill-top ridges and off-shore sandbanks of Spain produced 40.8 percent of the country's electricity needs - 9,862 megawatts to be precise."

The much-derided turbines, he tells us, produced enough wattage to power the great cities of Madrid, Barcelona, Seville, Valencia, Toledo, Cordoba, Granada, Santander, Bilbao, and Zaragoza combined. The workday record on a Tuesday, 5 March, was 28 percent.

In fact, the 40 percent "record" lasted only a brief period as heavy winds lashed Spain, providing the 40.8 percent of total consumption only because of the low demand during the Easter holiday weekend.

Nor indeed was this record any great advance on the last peak, which occurred on 19 March 2007 when the system produced 8,375 megawatts or 27 percent of Spain's energy – out of an installed capacity of 15,145 megawatts which was then delivering an average load factor of something less than 30 percent.

Furthermore, so exceptional is this contribution to the Spanish energy system that it is not surprising it makes news – not least because only under very tightly controlled conditions, for very short periods, can that amount of power be allowed into the grid system. Supply experts warn that a percentage of 23 percent is higher than the grid can accommodate, forcing power utilities to takes turbines off the grid when the supply peaks, to avoid network collapse due to instability.

This situation, Ambrose coyly tells us, arises from "years of nurture" by the Spanish government which, he says, "have paid off." Spain is a global superpower in the wind race, with 15,000 megawatts of capacity.

"Nurture", however, is an interesting description for what are usually called subsidies which, until recently have been so huge that even the Spanish government has been embarrassed by them. Up until December 2006, the industry was being paid about €97 per megawatt hour, a level described as "exaggeratedly high", which forced a reduction to between €67 and €84.

But it is only that level of subsidy which has enabled Spain in the last eight years to become the world's second-largest producer of wind power after Germany. And, even then, the flow of largesse has barely been checked. Overall, Spain will devote €1.8 billion a year until 2010 to subsidising wind power.

None of these details, however, emerge from Ambrose – a man who usually excels with facts and figures. Instead, he tells us that "every mill costs €2.6m (£2m) to buy and erect, yet the Danish manufacturer Vestas is sold out until 2010," then adding that one leading operator, E.On, "is coy about profit margins." But, with a subsidy of €1.8 billion, is this surprising?

Ignoring this, Ambrose tells us that, "the European operations are flirting with break-even cost," which seems neglect the minor detail that one of the options they are offered is a fixed price of €73.228 per megawatt hour for everything they can generate during the first 20 years of existence of a facility, and €61.200 per megawatt hour after that. Alternatively, they can opt to take the market price for electricity, plus a top-up of €29.291 per megawatt hour for 20 years.

A beneficiary of this largesse, Frank Mastiaux, the head of E.On's green operations, is nevertheless allowed to say that, "When this began in the 1970s it was a niche play, a nice tax break for German dentists and doctors. Now it is turning into an industrial business. Productivity has grown by 150 times in 25 years."

Mastiaux adds that, "The cost of wind power is €50 to €100 a megawatt hour," – his larger machines presumably coming in at €50, which makes his operation a nice little earner.

Unsurprisingly, he believes that, "Renewables will soon be a €200bn business," remarking that, "I can't think of any other industry with growth like that." Interestingly, we can't think of any other industry with such a generous subsidy regime, which might possibly explain the rate of growth for an industry that produces electricity at two to three times the cost of nuclear energy, even after decommissioning.

However, Wulf Bernotat, E.On's chief, also glides over the subsidy question. Wind power ticks more good boxes than almost any other option, he says. It is clean, nearly silent, emits no CO2, pays its way, and is "home made". "Those who don't like wind power have a duty to offer an alternative. So far they haven't really come up with anything," he says.

Strangely, there are many who have indeed come up with that alternative – "clean" nuclear power at a third of the cost of wind power. But, when the energy companies can milk the system for subsidies - and lose money on other forms of electricty generation - their enthusiasm for "green" power is hardly surprising. What is surprising is that Ambrose has fallen for the con.