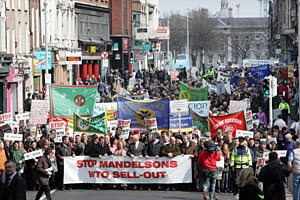 Almost entirely ignored by the British media, the Irish constitutional Lisbon treaty referendum campaign is beginning to warm up nicely.

The latest development – as reported by New Zealand TV, which tells you something about our media – is a poll of 500 people by Ireland's Referendum Commission that had 62 percent admitting they did not understand the treaty at all. Only five percent claimed to understand the treaty text "well or very well" – and we are surprised that it is that many.

With lack of understanding – although that may be a coincidence – comes a rising tide of rejectionists. A separate poll over the weekend by Ireland's Sunday Business Post newspaper showed a drop in support for the "yes" camp with 35 percent saying they would back the treaty, down from 43 percent canvassed in February. Those who planned to vote "no" rose to 31 percent from 24 percent previously. "Undecideds" stood at 34 percent, up from 33 percent.

One of the "yes" campaign's concerns is that the treaty could be a focus for issues such as the harmonisation of corporate taxation, but there are other issues building up. Earlier this month - again unreported by the British media – more than 10,000 farmers took part in a protest march in Dublin city centre (pictured), against changes which are expected to follow the treaty ratification which could affect the way trade deals are negotiated by the EU.

High profile in the "no" campaign is Sinn Féin, the only Irish political party to oppose the treaty. Group leader Caoimhghín Ó Caoláin complains that government representatives and others on the "yes" side have been promoting the "scare story" that a rejection of Lisbon will see the Irish "turned into the dunces of the EU class who will be put standing in the corner or, worse still, expelled altogether".

Ó Caoláin said that prime minister Dermot Ahern and minister of state Dick Roche had specialised in this line. Yet, he said, "France and the Netherlands rejected the EU Constitution in 2005. They didn't lose influence or standing in the EU and nor would this State if we did likewise."

He added: "The purpose of a referendum is for the citizens of a member state to freely and democratically decide on the matter at hand. As democrats we must all, including our EU partners, respect the outcome of the referendum. Attempts to bully or bribe us into voting a particular way are undemocratic," then declaring: "The attempts by the political elite in Ireland and in Brussels to deceive the people have gone well beyond rhetoric…".

Amongst the "scare tactics" Ó Caoláin cited came from government MP, Ruairi Quinn, who said, "we have to support the treaty, it is not perfect but it is the only Europe around".

That is false stormed Ó Caoláin: "We have a choice. We can say no to the drive towards the type of Europe envisaged by Jose Barroso who said last July: 'Sometimes I like to compare the EU as a creation to the organisation of Empire. We have the dimensions of Empire'".

Would that we could ever hear such sentiments expressed by a British politician. Sadly though, the Westminster water seems to have rotted their brains and dissolved their spines. We will have to be content with the vicarious pleasure of enjoying the Irish in full flow, while we lament the turpitude of our own representatives.