They are not taking this seriously 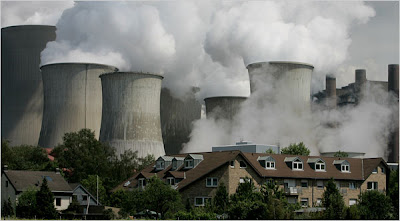 "At a time when the world's top climate experts agree that carbon emissions must be rapidly reduced to hold down global warming," writes the New York Times, Italy's major electricity producer, Enel, is converting its massive power plant from oil to coal, "generally the dirtiest fuel on earth".

Furthermore, the paper tells us, over the next five years, Italy will increase its reliance on coal to 33 percent from 14 percent. Power generated by Enel from coal will rise to 50 percent.

Not only that, Italy is not alone in its return to coal. "Driven by rising demand, record high oil and natural gas prices, concerns over energy security and an aversion to nuclear energy," we are told, "European countries are expected to put into operation about 50 coal-fired plants over the next five years, plants that will be in use for the next five decades."

By contrast, in Great Satan's domain, the United States, fewer new coal plants are likely to begin operations, in part because it is becoming harder to get regulatory permits and in part because nuclear power remains an alternative. Of 151 proposals in early 2007, more than 60 had been dropped by the year’s end, many blocked by state governments. Dozens of other are stuck in court challenges.

As the NYT seems happy to acknowledge, all this is freaking out the eco-zealots in Europe, who are now (and have been for some time) convinced we are on the road to perdition. "They are aghast", the NYT observes, "at the renaissance of coal, a fuel more commonly associated with the sooty factories of Dickens novels, and one that was on its way out just a decade ago."

The paper points to protests in Civitavecchia, Italy, at a new coal plant in Germany, and at one in the Czech Republic, as well as at the Kingsnorth power station in Kent, which is slated to become Britain's first new coal-fired plant in more than a decade.

The huge joke is that the future operators of these plants are claiming that they will make them "as clean as possible", although they are relying on carbon capture and storage technology to achieve this. Yet the technology is not commercially available and no one knows if it is feasible on a large, cost-effective scale.

In the front line of the objectors is warmist guru James E. Hansen, he of NASA's Goddard Institute for Space Studies. "Building new coal-fired power plants is ill conceived," he says. "Given our knowledge about what needs to be done to stabilize climate, this plan is like barging into a war without having a plan for how it should be conducted, even though information is available." He has only one prescription: "We need a moratorium on coal now …with phase-out of existing plants over the next two decades."

The problem for Hansen, though, is that money speaks louder that Gia. Says the NYTEnel and many other electricity companies say they have little choice but to build coal plants to replace agering infrastructure, particularly in countries like Italy and Germany that have banned the building of nuclear power plants. Fuel costs have risen 151 percent since 1996, and Italians pay the highest electricity costs in Europe – and coal is relatively cheap compared with oil and natural gas.

Hilariously, the economic advantages are even defeating the EU's emissions trading scheme, which are aimed at skewing the economics of high emission plants, to encourage the use of "green technology", but, such is the price of oil that, even if the cost of carbon dioxide permits are factored in, coal still comes out on top.

Ultimately, though, all this goes to show that, whatever the "green" rhetoric, when it comes to making cold, hard decisions about keeping the lights on at affordable prices, for some countries at least, economics rule and the Greenies can go suck.