An inability to comprehend 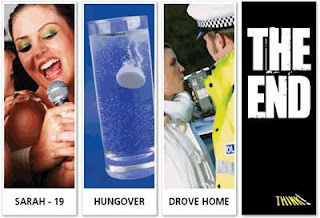 Trapped in its own little provincial bubble, The Times is back reporting on "ministers" plans to lower the limit to 50 milligrams of alcohol per 100 millilitres of blood, from the existing limit of 80mg.

The latest development is that our provincial government is "proposing" that drink drivers would no longer automatically lose their licences when found over the lower proposed limit. Instead, those caught driving over the new limit would be subject to a "two strikes and you're out" rule under which they would receive six penalty points for the first offence and only be disqualified from driving if they reoffended within five years.

The point here, of course, is that this idea does not originate from Whitehall. It is part of the same EU initiative, promulgated in 2003, that brought us the prospect of a lower limit and random breath testing. The removal of an automatic ban – which has been a central feature of British drink-driving laws – is entirely driven by the EU commission's plans to harmonise traffic law penalties throughout the member states.

Predictably, the plan has brought protests from road safety groups, who fear that abolishing the automatic ban will send a confusing message to motorists. They argue that it might encourage some to risk drinking and driving because the consequences of being caught would be less serious than they are now.

What they do not appreciate, though – and have not been informed by the media – is that, because this is an EU initiative, it is a done deal. Debate and discussion is an irrelevance. The announcement of "plans" by ministers is in fact a softening-up exercise which is but a precursor to rolling over and accepting the diktats from Brussels.

Interestingly, The Times retails concerns from the "influential Parliamentary Advisory Council for Transport Safety" which says it is undecided about whether to support the ending of the automatic ban. Rob Gifford, the council's director, is cited as saying: "If it resulted in double the number of people losing their licences for breaching the lower limit, it could clog up the courts and create more of a problem because people would just drive while disqualified."

What the paper fails to say is that the Parliamentary Advisory Council for Transport Safety is no longer influential. Its views – which were once shared by our provincial government - are no longer of any significance, as long as the agenda is driven by Brussels.

Furthermore, this is an area where there are a wide range of views about the best way to tackle what is acknowledged to be a problem. There is a valid argument as to whether measures should be targeted at specific groups of drivers known to be at greater risk – and to cause more problems – or whether broad-brush measures should be adopted.

Some sense of this debate comes in papers here, here, and here, making this a valid issue for public debate, preferably led by our legislators in parliament.

In the greater scheme of things, it could well be that the outcome of such a debate would be that we adopted measures similar to those demanded by Brussels. But, there again, it could be that a different approach was deemed to be more appropriate.

The effect of Brussels intervention, therefore, is to close down the debate – marginalising parliament in the process - ending up with the UK having measures imposed on it, rather than allowing for adoption after widespread discussion and the emergence of a broad consensus. That is the measure of the malign effect of rule by EU legislation. Law is increasingly imposed on us, rather than agreed by us, the very antithesis of democracy.

We might have ended up with the same law (but might not have), but the way that law is made has changed dramatically. Not only is that a bad thing, even worse is the fact that our media are displaying a total inability to comprehend what is happening.