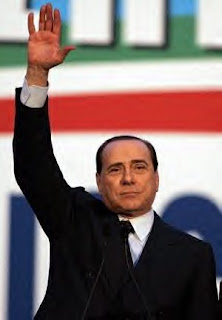 The Italian right-wing alliance under Silvio Berlusconi, the once and future come-back kid, appears to have won a substantial victory.

Pollsters' projections, based on partial results, gave Berlusconi a 99-seat majority in the 630-member lower house and an advantage of up to 30 seats in the Senate, which has 315 elected and seven lifetime senators.

That contrasts with the two-seat Senate majority that the last government had under Romano Prodi, who resigned in January just 20 months into his five-year term. Berlusconi had set his sights on a 20-seat majority in the Senate.

Of course, this will be a coalition government with a strong presence by the Northern League that is still fighting for a more federal structure. Despite the handsome majority, Signor Berlusconi might find that a problem.

One must admit that as a reforming prime minister Berlusconi left a good deal to be desired. His great value, apart from his basic pro-Americanism and suspicion (no more than that) of the European Union, was his ability to reduce the left of centre main-stream media (a tautology, really) to foaming rage. Clearly, he does not have the same effect on the people of Italy.

Another report by Reuters shows that the left is once again whining with self-pity and blaming it all on the people who, as usual, have let them down.

The New York Times points to what might be an interesting political development in a country that is not known for the stability of its governments.

But in some basic ways, the election signaled a decisive shift in a nation whose politics have been unstable because of the involvement of many small parties with narrow interests. As head of the newly born Democratic Party — the merging of the two largest center-left parties — Mr. Veltroni had refused to run with far-left parties as Mr. Prodi had done.

As a result, the ANSA news agency reported that the number of parties in the parliament’s lower house, the Chamber of Deputies, would drop from 26 to just 6. On both the left and right, experts said — and in some cases lamented — the election showed a shift toward a more American- or British-style system of two dominant parties.

Its editor, Antonio Polito, a departing senator from the now-defunct Margherita party, said: “The left is disappearing for the first time in history.” Referring to Mr. Veltroni’s party, he added, “The only party that managed to save itself after two disastrous Prodi years is a party that is
modeling itself after the Democratic or Labor parties,” in the United States and Britain respectively.

Email ThisBlogThis!Share to TwitterShare to FacebookShare to Pinterest
Labels: Italy