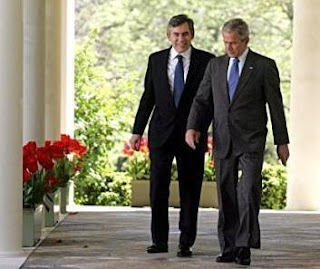 Challenged over the extent of the "special relationship" between Britain and the United States during his press conference yesterday with Gordon Brown, president Bush resorted to the Gummer tactic (he of BSE fame, feeding his daughter with said object).

"Look," said Bush to the assembled journalists, "if there wasn't a personal relationship (with Brown), I wouldn't be inviting the man to a nice hamburger. Well done, I might add."

This we learn courtesy of the New York Times, which has followed the progress of our prime minister in Washington.

Billed as a visit to celebrate what he called the "special relationship" between his country and the United States, Brown first met the three presidential candidates, only then going on to meet Bush, whence the our Gordon was asked if the trans-Atlantic relationship might improve under a new president. Bush, however, interjected with the quip: "One of those three has a good chance of winning."

Brown, on the other hand – or so it is reported - ducked the question. "It is for Americans to decide who their president is going to be," he said, adding: "What I was convinced of, after talking to each of them and talking about the issues that concern them and concern the world, is that the relationship between America and Britain will remain strong, remain steadfast."

The word of the day, apparently, was "special," as in relationship. Between them, the two leaders used it nine times. But when a British reporter suggested that the "special relationship" between the countries was "a little less special" now than when Blair was in office, the NYT has it that Bush grew a little tongue-tied and struggled for words.

"Listen, our special relationship has been forged in common values and history, and we're making history together," he said. "Our relationship is very special and it’s — I'm confident future presidents will keep it that way. There's just such a uniqueness in the relationship. That's not to say you can’' have other friends, and we do. But this is a unique relationship, truly is."

It was then that Bush introduced the hamburger fidelity test. And having been set, we now know how to measure any future relationship – whether with Obama, Clinton or McCain. As long as they are prepared to invite Mr Brown to a "nice hamburger", all is well with the world.