The lies and deception continue 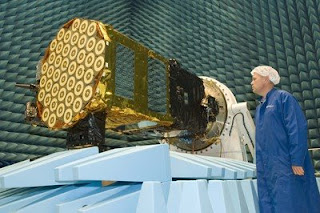 Our government yesterday decided to commit €3.4 billion of our money to its vanity project, aka the Galileo satellite navigation system, thereby finally turning its back on its guarantee of November 2000 that "public financing in the form of subsidies" would not be needed after 2007.

The figure, like the system, is pure moonshine, €3.4 billion being nowhere near enough to get the full constellation launched and operational - €10 billion being closer the mark, with additional through-life costs to maintain the system.

This development, therefore, represents the latest in a long line of lies, deception and incompetence that stands as a glorious testament to the true nature of the form of government that constitutes the European Union.

Needless to say, because the decision has been taken by our real government in Brussels, rather than our etiolated rent-seekers in Westminster and Whitehall, the British media – other than the BBC website - has found itself incapable of reporting it.

The Houston Chronicle managed to carry the story, as well as the Chinese Peoples' Daily Online, but not the great British media. This remains as much in denial as to the true nature of our government as are our politicians (and political blogs), and prefers to wrap itself in the warm glow of domestic issues, in the manner of local papers reporting on the machinations of their local councils.

Not for our great fourth estate is there any wider horizon beyond the shores of its foetid "little England", which is of course why those lying, cheating bastards in our Brussels government (of which our own local government forms part) get away with so much.