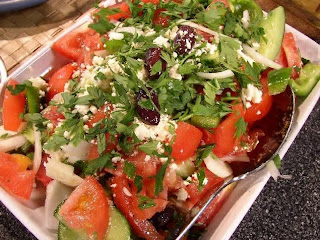 Boycotting goods is all the rage. The Chinese are doing it to the French (and that deserves a separate posting) and the Macedonians are doing it to the Greeks. News of this comes from Transitions Online, whose journalist, Ljubica Grozdanovska, may know a great deal about the Balkans but seems to be a bit hazy on the United States.

When the French government refused to support the American-led invasion of Iraq in 2003, restaurants in Washington replaced “French fries” with “freedom fries” and the Gallic kiss became taboo. Patriots poured vintage champagne down the drain to show their distaste for the F-word.

Americans may now be eating crow with their fried potatoes and sparkling wines.

I’ve got news for the lady, which she and some other Europeans might like to think about. While French fries have remained available in the States, often called freedom fries, the alternative, known as home fries, are absolutely delicious. Even more to the point, Californian wine is not something to sneer at. Its consistently high quality is pushing French wines out of the world market, boycott or no boycott.

Getting back to Macedonia. As we have written before, Greece will not agree to the country becoming part of either NATO or the EU unless it changes its name, the present one, fully accepted by all except the EU under Greek pressure, apparently indicating that Macedonia may have territorial demands on northern Greece. Macedonia denies this and, to be fair, has, rather unusually for a Balkan country, never given the slightest indication of those demands.

Discussion of Macedonian membership of NATO – not necessarily something to be wished for – was postponed at the Bucharest summit because of Greek objections and the issue was reduced in importance, what with the kerfuffle over Ukraine and Georgia.

The Greeks are now trying bribery, as Macedonia Online reports.

"Greece will increase the financial support of its northern neighbor and will remove the visa regime if Skopje distances itself from the stubborn position for its name" says Greek Foreign Minister Dora Bakoyannis in todays interview for 'Apogevmatini'.

"Athens will invest 75 million euros for the highway infrastructure of Corridor 10, which connects the neighboring country with Greece and EU, will invest in business and will gradually remove the visas". says Bakoyannis.

Well, how nice. And who will be providing those 75 million euros, one wonders, given the amount of money Greece receives from the European Union in the form of one subsidy or another. A case of Greeks bearing other people’s gifts, methinks.

Macedonian President, Branko Crvenkovski has complained to UN SecGen Ban Ki-Moon, about Greece blocking his country’s application to NATO because of the 17-year long dispute over the name.

Don’t know about the UN SecGen but the NATO SecGen, Jaap de Hoop Scheffer, who has gone to Skopje, is staying firmly on the fence, urging all to resolve the name dispute as soon as possible.

Meanwhile, the Macedonians themselves are taking matters into their own hands. As Ms Grozdanovska says:

But Macedonians appear to be using a similar show of altruism against a neighbor by removing “Greek” from their salads and gyros, and dropping olives from their diet.“Don’t buy Greek ouzo.” “Don’t travel to Greece.” “Boycott all Greek products.” “Protest against Greece’s behavior.” “Forget Greek olives.” “Don’t eat Greek gyros.”

These are just a few of the messages and public statements floating around Macedonia since Greece blocked its neighbor’s entry to NATO at the alliance’s recent Bucharest Summit. Leaders of the 26-member NATO alliance agreed on 4 April to invite Croatia and Albania to join, but bowed to Greek opposition to Macedonia’s constitutional name (Republic of Macedonia) after several compromises failed.

There are a few setbacks to the Macedonian boycott policy of the kind that the Americans might not have experienced when they were filled with righteous anger against the people they described as “cheese-paring surrender monkeys”.

But the name controversy may have deeper implications for the citizens of Macedonia, an EU candidate country with a 36-percent unemployment rate and economic output that is 27 percent of the EU average. Since the trade embargo ended in 1995, Greece has accounted for a growing portion of Macedonia’s investment and trade.

In recent years, thousands of Greeks have crossed the border to visit Macedonian towns such as Bitola, Dojran, Gevgelija and Strumica, drawn by lower prices at restaurants, shops and markets.

Visiting Greeks also have flocked to the new casinos built in the near border area. The growth in commerce has boosted cooperation at a very human level – people on both sides of the border are learning the other country’s language.

Strains are now showing in these relationships, with commerce in these border towns slowing to a trickle, according to Greek and Macedonian media reports.

Donco Tanevski, president of the Hotel Association of Macedonia, said 90 percent of Greeks planning to visit Ohrid for May Day had cancelled their reservations. Typically, some 2,000 Greek tourists show up in the lakeside town for the 1 May holiday, Tanevski said.

Then again, this sort of low-level commercial interchange is likely to revive. After all, the Greeks do have to go somewhere to gamble.
Posted by Helen at 00:06