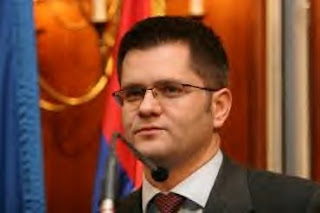 Most of us would agree that Serbia has not had a particularly good press in the last five to ten years in the West. Before that, of course, the European Union and most of the political establishment supported Slobodan’s Milosevic to keep that federation together. Some people have not quite recovered from that point of view but, by and large, any support has been tepid to lukewarm.

The organizers of the visit suggested that I spend some time interviewing him on behalf of EUReferendum. Great, I thought, and prepared meticulously by reading all the stories as they came out meticulously and looking up Mr Jeremic’s biography. (And very interesting it is, too, particularly the comment about him coming from “a long lineage of Pozderac family considered one of the most influential political families in Bosnia and Herzegovina during the communist rule”.)

On the whole, Mr Jeremic has not distinguished himself by particularly adroit diplomacy, as we pointed out soon after Kosovo’s declaration of independence. Still, the man is young and wants to remain in his position, we must assume, after the May 11 election.

I was wrong. Mr Jeremic, though the Foreign Minister, seems to have only a very slight understanding of diplomacy. He met with foreign ministers and tried to persuade them to be nice to and about Serbia in their forthcoming Council meeting but diplomacy means a good deal more than just formal discussions.

Mr Jeremic was due to appear on Newsnight on Friday evening, to give interviews to the Financial Times, another BBC programme, EUReferendum and, possibly, one or two other outlets. The problem was that other stories intervened and Newsnight decided, possibly not very courteously, decided to devote the programme to the closure of the Grangemouth oil refinery and the looming strike.

One could argue that Newsnight does a little too much of this: both discarding potential interviewees and concentrating for too long on just one story. None of that is relevant. The thing to do at such a time is to double the charm offensive with the other outlets you have had an interview arranged with and say yah-boo to Newsnight.

Sadly, Mr Jeremic has all of this to learn and the way things are going in his country he may not get the chance. Instead of redoubling the charm offensive he flew into a rage and cancelled all interviews. All attempts to make him change his mind failed. A wasted opportunity to present Serbia’s point of view and to explain one or two matters, such as his reaction to the softening of the Dutch stance on Serbia and the EU signing an SAA.

Other questions from me would have been about his predictions for the May 11 election and, above all, his opinion on what Serbia would be getting out of its agreement with Russia.

The latest information we have is that Russia is beginning to bully Serbia already, demanding that the deal signed by President Tadic and Prime Minister Kostunica earlier this year be finalized, despite the fact that the present governments is merely a caretaker one.

Critics charge that the caretaker government has no authority to finalize the deal, under which Russia will allegedly acquire NIS for a fraction of its market value in repayment for its political support over Kosova. Defense Minister Dragan Sutanovac, who belongs to Tadic's Democratic Party and is an outspoken critic of Kostunica, said on April 24 that he will block any attempts to finalize the deal before the May 11 Serbian general elections. He also wants the agreement renegotiated in any event. Kostunica argues that the deal is "too important" to be held up any longer. Several high-ranking Russian officials recently called on Serbia to ratify the agreement.

These are all important matters and the Serbian Foreign Minister’s job, if he is travelling at the Serbian people’s expense, is to try to get across his country’s point of view. Well, he has wasted his opportunity.
Posted by Helen at 17:09